In South Africa, thousands have protested against the introduction of a minimum wage deemed too low and new laws restricting the right to strike.

It is the SAFTU, the second largest trade union federation in the country, opposed to the ruling ANC, which is at the origin of this strike movement.

This confederation has nearly 800,000 members and on the Wednesday, there were thousands to protest against the establishment of the minimum wage next month. They claim more than 3 times the amount proposed by the government.

On May 1, the minimum wage should be set at $1 and 60cents an hour, it’s a shame, a slave salary, the protesters launched.

President Cyril Ramaphosa and his supporters say that this should help reduce inequalities and revive the economy at half-mast.

Some employers are worried about having to pay better for their staff, some say they cannot afford it and that this will only inflate the already high unemployment figures.

But the strikers assure that they will not yield and that much better wages are needed.

They also denounced the introduction of new laws which, according to them, limit the right to strike.

The protests are the first major social movement faced by President Cyril Ramaphosa, a former trade unionist who became a successful businessman, while also managing a violent protest movement in the north-west of the country.

USA: Trucks lined up to prevent a man's suicide!

APC will fail in Bayelsa, they are killing, terrorising people – Dickson 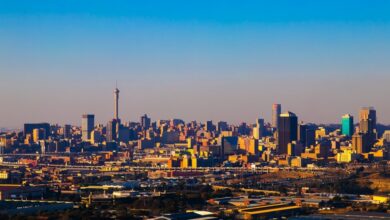