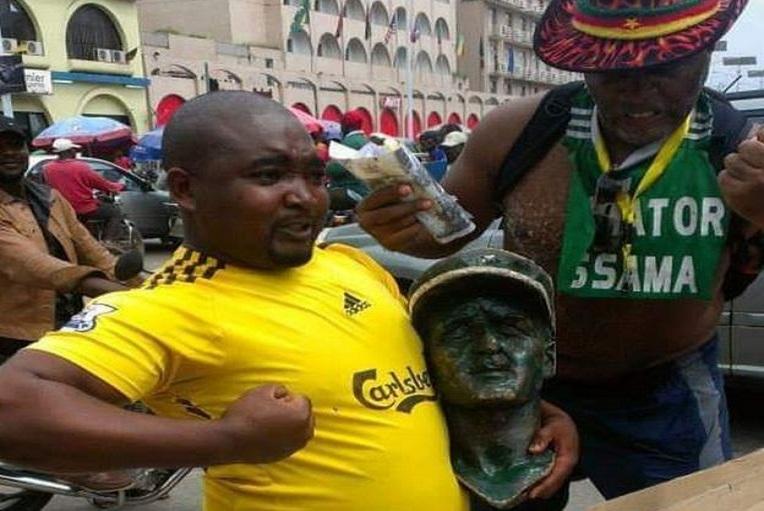 Seven times beheaded, 20 times overturned – this is the fate of the monument to Marshal Philippe Leclerc located in the Cameroonian city of Douala. For the perpetrator of these crimes, a Cameroonian activist, the colonial symbols must be replaced by monuments of African heroes.

The Cameroonian activist André Blaise Essama campaigned for the debunking of colonial symbols long before the anti-racist and anti-colonial wave that is currently shaking many countries. It is the statue of Philippe Leclerc de Hauteclocque, a great figure of the liberation of France during the Second World War, located in Douala, the economic capital of Cameroon, which has been in the sight of man for years.

“General Leclerc came to represent the erasure of the Cameroonian colonial memory and replace it with a French memory,” he explained to the British journalist.

“I have beheaded Leclerc’s head seven times and knocked over the statue at least 20 times,” the man told the BBC. And each time he damaged the statue of the general, who was posthumously elevated to the dignity of Marshal of France, the local authorities restored it.

For these facts, judged as acts of vandalism, the Cameroonian has been imprisoned on several occasions. His sentence was up to six months, but sometimes he was able to avoid it by paying fines, thanks to the money raised mainly by his supporters in Cameroon and the diaspora.

According to the Cameroonian, he unbolts statues with bare hands. In addition, before each operation, he uses “an incantation to the ancestors”, it sounds.

Its objective is to replace these “colonial symbols” with Cameroonian and African heroes, it indicated. But it will also be an exception for non-African personalities who campaigned for “the good of humanity” such as, for example, the Princess of Wales Diana Spencer, very popular in the country.

Unlike General de Gaulle, “for whom the Cameroonian people seem to have affection”, General Leclerc is unpopular in the country because he “did not seem to think about people”, explains the retired Cameroonian academic Valère Sword, quoted by the BBC.

Lake Nyos in Cameroon: the most dangerous lake in the world

Death sentence of separatists in Cameroon: “strong message of justice to terrorists”