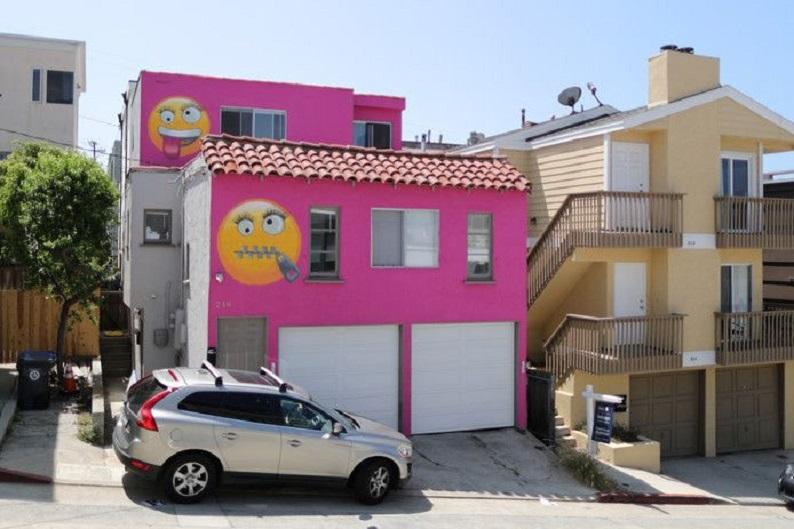 Residents of a wealthy residential neighborhood in Manhattan Beach are angry. They demand that the municipality oblige their neighbor to repaint her house, but in neutral colors. The bright pink attraction with giant emojis is the result of a neighbor’s quarrel.

For several years it has been forbidden to rent houses in Manhattan Beach for periods of less than 30 days. Despite that ban, Kathryn Kidd had put her house on AirBnB on 39th Street, near the beach on the coast of California. The woman claims that she knew nothing about the ban. The neighbors didn’t find it funny. They reported the woman to the municipality, which resulted in a $4,000 fine.

A few weeks later a painting team suddenly showed up. Kidd had her house sprayed completely pink. To top it all off, two gigantic emojis emerged with rolling eyes and large eyelashes, one with a hanging tongue, the other with a zipped mouth.

“She does this to bully us,” says Susan Wieland, one of the residents. “I even feel personally attacked,” said the woman, who has “eyelash extensions.”

Brighten up a sour neighborhood

Kathryn Kidd claims that she just wants to cheer up the neighborhood. “The people here seem sour and depressed. They are too concerned about other people’s affairs,” she says. “That is why I wanted to delight them with a colorful, positive and joyful message.” According to her, it has nothing to do with revenge.

The municipality already said that it is not illegal. There are no rules about how residents may or may not paint their house.