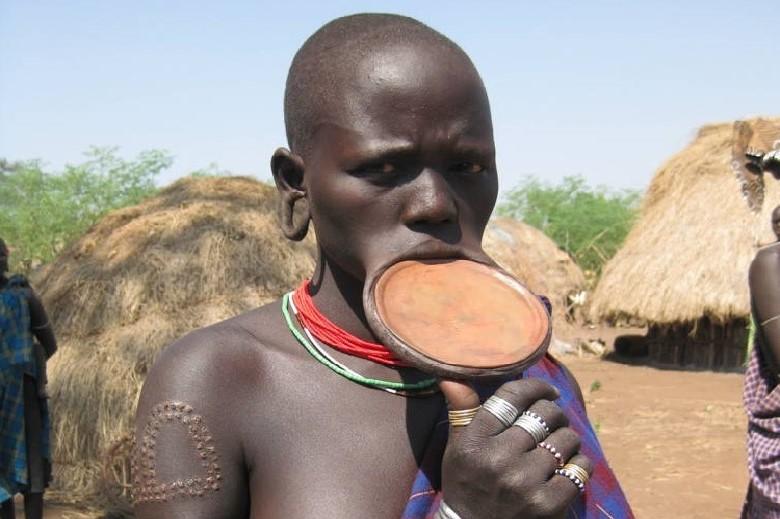 Several African tribes generally engage in body modifications such as the insertion of lip plates. This modification is done by inserting from small to larger discs, usually circular and made from clay or wood, into a hole drilled in the upper or lower lip, or both. Do lip plates hurt, and what does it symbolize?

Archaeological evidence indicates that these pierced lip ornaments were invented independently no less than six or more times in Eritrea and Ethiopia (8700 BC), Sudan, coastal Ecuador (500 BC), and Mesoamerica (1500 BC).

Presently, the custom of lip plates is maintained by a few ethnic groups in Africa and some parts of South America. One of these groups in Africa is the Mursi or Mun tribe (in Ethiopia) as they called to themselves. The Mursi are a Nilotic pastoralist ethnic group, reside mainly in the Debub Omo area of Southern Ethiopia.

They are surrounded by mountains between the Omo River and its tributary of the Mago. The Mursi’s home is one of the most isolated areas in the country, with its mainly known with lips plates.

Women of the Mursi tribe can have their lips excised at the age from 15 or 16, after which the lip is cut, and a small clay plate is then inserted into the rim. Over the years, more massive slabs are inserted into the lip, causing it to stretch; the larger the clay slab, the more valuable the woman is before she marries.

However, it’s unique, and part of their tradition, Mursi women, only carry the plates for a time because they are so bulky, hurt, and uncomfortable.

Furthermore, it has been said that this practice was first carried out to make the natives look ugly when the Arab merchants continually attacked their villages in search of slaves. This explanation has been rejected because studies reveal that the plaques are a symbol or expression of social status.

What does lip plates symbolize?

The lip plate symbolizes some meanings. Firstly, it is a symbol of great beauty. Second, it marks a commitment to the husband because it is worn with great pride in serving him food. If the husband dies, the lip patch is removed because the outward beauty of a woman is said to fade after his death. Finally, the plate is a powerful visual marker of Morsi identity. Without it, they run the risk of being mistaken for a member of another tribe.

But some evidence was found in the various ways in which several groups endeavoring to work with Mursi communities portray and interpret images of Mursi women with lip-plates as a kind of “imposed disability” (Russell 2010: 18).

For instance, in 2009, the Ethiopian-Canadian-based charity organization “Friends of South Omo” included the following information on their homepage: In some tribes in South Omo, one of which is the Mursi Tribe, decorative lip plates dictate a woman’s value in marriage.

According to BoingBoing, some women of the Mursi tribe, in Ethiopia, with lip plates, which traditionally would be considered as men’s decoration. These Mursi women are famous for their known clay lip plates, a symbol of beauty.

Yes! Its absolutely hurt when cutting and piercing the lip, but moderately painful after the healing of the wound or during wearing the plate because lip will take elasticity.

Once the cut is made, a stick is inserted to enlarge the hole, and it hurts over time, and as the lip will take elasticity. Placing plates more and more will increase the size, and these can exceed the 20 centimeters in diameter.

For instance, the larger the plate, the more cows she is worth at the time of marriage. The lip plates make day to day functions that they take entirely for granted, such as eating and drinking, challenging, as you will see in some images.

A spectacular YouTube video, which included archival footage of Sara-Kaba women with labrets in both top and bottom lips, originally taken by explorers visiting southern Chad in 1908, was used to support the claim that lip-plates were “harmful” since they “make eating and drinking extremely difficult.”