The mysterious sarcophagus of black granite discovered in Egypt has not yet revealed all its mysteries but it continues to feed the wildest rumours. After its opening, a red liquid stagnating around three decomposed mummies was discovered, enough for the Internet to see the liquid of eternal life.

The tomb, which dates back to the Ptolemaic period between 305 BC and 30 av. J.-C., was found in the city of Alexandria. The sarcophagus, 6 feet high, 8.7 feet long and 5.4 feet wide, found inside with a bust, is the largest ever found in Alexandria. It has never been open since it was closed more than 2,000 years ago. The only thing that we know precisely today that the tomb was dedicated to a person with a high social status.

After its opening, terrifying images of a trio of skeletons floating in the murky water led to rumours that the “mummy juice” contained medicinal or supernatural properties, and many proposals from people wishing to taste the magic elixir have arrived.

More likely, scientists consider that its bizarre colour means the presence of a metal such as mercury.

The large black granite sarcophagus was discovered in the Sidi Gaber district earlier this month and was opened despite fears that it would trigger an ancient curse. The workers found the black granite tomb 16 feet underground during the construction of an apartment building in the historic Mediterranean port city.

The Secretary-General of the Supreme Council of Antiquities, Dr. Mustafa Waziri, rejected early speculation that the tomb could contain the remains of Alexander the Great, saying it would have belonged more to a priest.

However, the discovery of a possible arrow damaging one of the skulls means that the bones probably belong to military officials, according to a statement issued by the Egyptian Ministry of Antiquities.

The authorities also revealed that the liquid was neither a “juice for mummies that contains an elixir of life” nor a “red mercury”, but something much more basic, wastewater that has infiltrated.

But the ugly truth – or in this case, smelly – was not enough to frighten the fanatics, even inspiring an online campaign on Change.org titled “Let the people drink the red liquid of the black sarcophagus” that drew more than 20,000 signatures.

“We have to drink the red liquid from the dark sarcophagus cursed in the form of a kind of carbonated energy drink so we can assume its powers and finally die,” wrote petition founder Innes McKendrick, as an explanation. 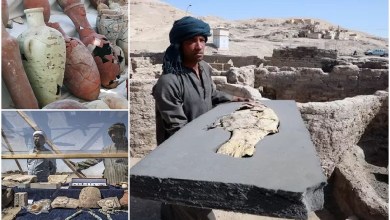 These untouched treasures in the 3,000-year-old Lost City in Egypt