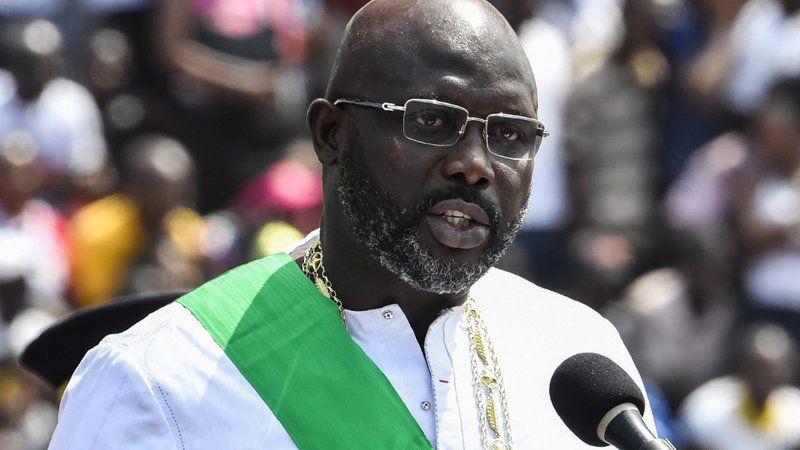 The famous former footballer elected to the presidency of Liberia, a year ago to the day, speaks to his compatriots as a preacher would do. To calm his compatriots and reject criticism of which he is the object.

On the eve of the New Year, George Weah invited his government and his supporters to the inauguration of a family church. On this occasion, he gave a religious service of several hours, according to Jonathan Paye-Layleh, a BBC correspondent in Monrovia.

“God has given everyone a talent he can use for his own benefit,” says George Weah, dressed in white dress, to the followers of Forky Jlaleh Family Fellowship.

Using metaphor, as churchmen often do, the 1995 winner of the Golden Ball – a prize for the best footballer in Europe – compares politicians to players in a football team. “When you are in the field, you should know that there are others on the substitutes’ bench, who are ready to replace you at any time.” Remarks greeted with a volley of applause by the faithful, according to Jonathan Paye-Layleh.

But Weah is not a prophet in his country, let alone within the Liberian Catholic Church. At the end of the year, the Council of Churches in Liberia spoke on behalf of some of the faithful, expressing the frustration felt after the euphoria of victory in the presidential election of the former PSG striker, AS Monaco, AC Milan, Chelsea, Manchester City and OM.

“About a year ago, we elected a government in the hope that our lives would be transformed economically, but most often what we hear is the negative side of governance, the economic challenges (…) corruption, abuse of power, fraud, waste”, deplores Prime FM, a local radio, a head of the Council of Churches in Liberia.

The People’s Unification Party, an opposition party, is more severe on President Weah: “At the end of your first year in power, our people (…) are hungry, the bread equation (…) is becoming more and more complex. A poor economy is not a good sign for peace and security, when people are hungry, they are certainly angry, Liberia is angry because its people have hunger.”

Nevertheless, the critics fuse against him. His critics claim, for example, that the publicity about the withdrawal of his jersey number 14 was one of his priorities after his election, which, in their opinion, reflects the lack of vision of the Head of State.

After his victory in the presidential election, the capital, Monrovia, vibrated to the rhythm of ceremonies organized in honour of Arsene Wenger, the football coach who brought him to Monaco in 1988. The highest distinction Liberia was awarded to Wenger by the new head of state, who withdrew from football in 2003 to engage in politics.

President Weah is a role model for many young Liberians. He grew up in a shantytown of Monrovia. He became one of the biggest stars in world football and returned to university to complete his studies before being elected senator and then head of state.

But he is accused of not setting a good example because he did not make a public declaration of his heritage, as many Liberians expected. In the face of pressure from public opinion, George Weah finally filed with the relevant services, last July, a declaration of his assets, which remains to be made public. Some of his compatriots thus doubt his determination to fight against corruption.

Mr. Weah is also accused of privileging his personal interests in public affairs, particularly in the realization of two major real estate projects. The presidential camp downplays these critics, claiming that their echo is proof that Liberia is now a good place for all investors.

“Now that (…) our president ensures the safety of everyone, he gives at the same time the guarantee to all to invest in our country,” argues Mulbah Morlue, the president of the ruling party.

George Weah is also criticized for managing several public infrastructure projects, including improving roads in his own stronghold. When he ordered the roofing of more than 200 homes in the slum of Gibraltar, in Monrovia, where he was born and raised. It was officially said that it was a project funded by Mr. Weah, with his own resources.

But a few months after the end of the work, the local media unveiled a memo from the Ministry of Finance ordering the transfer of nearly one million US dollars from public funds, for the rehabilitation of houses. And so far, the finance ministry has remained silent on the memo in question.

All this undermines confidence in the authority of the head of state and revives the debate on his leadership in the local media. But Weah was warmly applauded in October when he announced free tuition at universities and public colleges. But some Liberians fear that the decision will not be implemented properly.

Prior to this announcement, the University of Liberia was struggling to make ends meet. And it currently works with only half the funds it needs. Some, including student leader Martin Kollie, see the promise of the President of the Republic as a tactic to divert attention from allegations of misappropriation of 100 million Liberian dollars. This money – newly printed banknotes destined for Liberia’s central bank – would have disappeared during its delivery.

The tickets ordered in November 2017, prior to Mr. Weah’s election, were reported to have disappeared from the containers of the port and Monrovia airport in March 2018, two months after Mr. Weah was elected president. The government ordered an investigation in September. And the journalist who revealed the alleged disappearance of the funds received death threats.