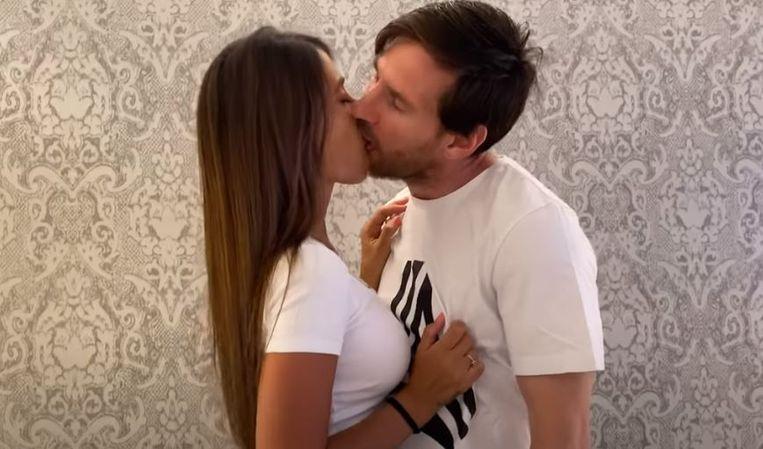 Lionel Messi and Antonella are waging tongues on social media. This time not because of a fantastic inspiration on the football field, but the passionate kiss with Antonella in a music video that spreads like wildfire.

In the clip, you can see how more than 100 couples around the world are making out with each other. And Residente was able to put a lot of famous people in front of his cart.

Actor Ben Affleck with his girlfriend Ana de Armas and singer Ricky Martin with husband Jwan Yosef, among others, pass by, as do many top athletes. Boxing champion Canelo Álvarez with Fernando Gómez, Paulo Dybala with girlfriend Oriana Sabatini, but also Lionel and Antonella Messi.

It’s mainly the contribution of the last couple (shown in the video below from 1′58”), that is discussed extensively on social media.

The fragment of the Argentinian star player of FC Barcelona and his childhood love, both 32 years old, can now be found on Twitter in multiples. “Who filmed this Mateo or Thiago?” One person says while another asks with a slight urge to stop sharing the short clip.

Still, others are concerned that one of the three sons of the couple, Thiago (7), Matteo (4), or Ciro (2), has served as a cameraman. Still, even here, the comparisons with Cristiano Ronaldo are not lacking.

Someone else suggests that the Portuguese and his partner Georgina Rodriguez are going to take it a step further. It’s just a few of the many reactions to the online talk on Twitter. In any case, Residente will not let it to his heart, because in three days, his video had been viewed almost nine million times.

Messi, who will probably not let his sleep for it, may start thinking about league football again. The Spanish Ministry of Health yesterday relaxed the rules for top athletes, with which the clubs in the first and second professional league enter the third phase of the start-up protocol.

The fourth and final stage is full group training, but that won’t be possible until the coronavirus is further curbed in the country. Players have been allowed to train individually for a while on the complexes of the clubs. The resumption of football matches is, therefore, one step closer in Spain. La Liga chairman Javier Tebas expressed last week the hope that the Spanish football league may start again on 12 June.

Lionel Messi’s insane records in a row: biggest ever at Barça and in Spain

Nothing but gratitude from teammates and Barca legends for Leo Messi

Barça suffers biggest European defeat ever: Bayern sink their ship with no title

Bartomeu refutes rumors: “Messi told me he is closing his career at Barca”