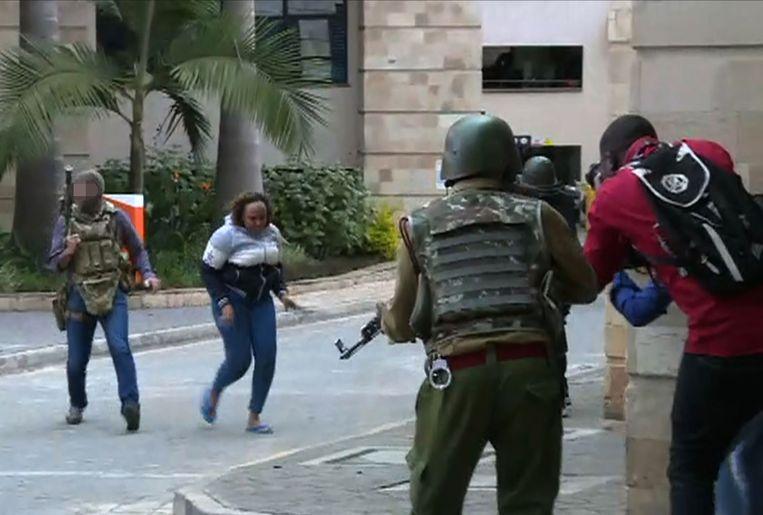 Who dares to win. That is the motto of the British SAS, the most specialized military unit in the world. And that is exactly what one of her soldiers took to heart this week in a terrorist attack on a luxury hotel in the Nairobi capital of Kenyan.

The man had no service, but saw what was happening and acted immediately. And he followed three deadly principles.
The attack happened on Tuesday. Armed members of the Islamic terror group Al Shabaab then invaded the chic DusitD2 hotel. Eventually 21 people were killed, including a Brit and an American. Five members of the terrorist group were also killed.

However, the death toll could have been even higher if it were not for a British SAS soldier. He turned out to have noticed the attack when he went shopping, ran to his chariot to get his assault rifle, his revolver and his combat knife, and immediately took action.

In his bulletproof vest, jeans and a balaclava over his head, he pushed into the hotel on his own and tried to bring as many people as possible to safety. At the same time, he also attacked the terrorists. “He will undoubtedly have killed a number,” said a SAS veteran who explained the heroic behaviour of his colleague in the British newspaper ‘Daily Mail’. “His actions do not surprise me. He has been trained for this, both physically and mentally.”

That training is really debilitating, if we can believe Harry McCallion. “It’s hell,” he says. “We are used to painful, nerve-wracking and physically debilitating situations. We all know very well what life-threatening danger is, because we have all been face to face with it.”

For himself, that was when he was with the South African special units in Mozambique and they were ambushed by the rebels. “As I ran through the trees, I tried to shoot one of them, but I was hit in my thigh myself. I finally managed to kill my assailant and looked at how bad the damage was on my leg. I could hardly stand still and gave myself an injection with an anaesthetic. Then hell broke loose. Eventually we were chased through the woods, with a bullet in my leg and a backpack of more than 30 kilos on my back. Only two days later we were evacuated.”

That is the kind of situations that are also practiced during the training. The selection procedure for that course lasts 5 months. There are two entry points per year, where only 1 in 10 participants pass. One of the tests is a trip of 65 kilometres that must be covered in one go and within a certain time. The soldiers carry a backpack of almost 30 kilograms, a rifle and their own water. “It is not for the weak and it can be fatal,” said McCallion. “Some of the candidates were killed, frozen to death in the winter or died under the heavy summer sun.”

After the training, the training continues, including in the infamous ‘Killing House’. That is the main training centre of the SAS for solving hostage situations. The elite units must enter one of eight rooms – which can be adapted with slidable walls, so that they look different each time – evaluate the situation at lightning speed and switch off possible threats. “There, the SAS soldier from Nairobi will have learned the tricks of the trade to save as many lives as possible,” said McCallion. “And he followed three deadly principles that are put into it: speed, aggression and the element of surprise.”

According to him, the soldier in Nairobi was to give training to the Kenyan security services. Normally, training staff may not participate in military operations, but it does not surprise McCallion that he did, and he does not expect the man to get into trouble with his superiors. “SAS soldiers are trained to always be ready for action,” he says. “If they see a combat situation, they automatically respond.”

He picked up a machine gun and attacked more than 250 rebels on his own for no less than 8 hours. Until the Nigerian police forces dismiss him. He was distinguished for that.

“The SAS hero in Nairobi did something similar,” McCallion said. “He did not think about himself. He saw the situation and realized that people were in danger and that he was the only one who had the training and the ability to do something. And he did that too.”

Despite his heroic act, we will probably never find out who the man was. “Like all SAS soldiers, he disappears discreetly into the background once the fight is over and the hostages are safe. He goes back to his training team. Until we need him and his team again one day,” McCallion said.