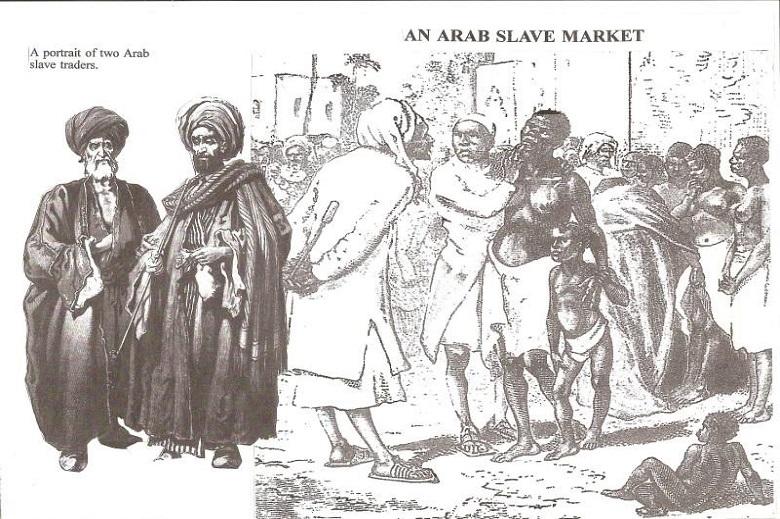 The issue of the slave trade in the East and sub-Saharan Africa, practiced by the Arabs, remains unexplored; it even seems to have been intentionally ignored and regarded as a taboo subject.

Nevertheless, the Arab slave trade, an essential part of African history, lasted for more than 1300 years. It began at the beginning of the seventh century and continued in one form or another until the 1960s. Even in Mauritania, slavery was not officially banned until August 2007.

The transportation of Africans to the countries of Islam consisted of two main roads: the maritime traffic consisting of the coast of East Africa and that of the Middle East on the one hand and the caravan traffic south of the Sahara on the other.

In the eastern part of Africa, Arab invasions affected an area consisting of the Horn of Africa, the Great Lakes region, and East Africa. Slaves who were captured during bloody raids were then shipped by sea from enclaves on the east coast of the continent, between present-day Somalia and Mozambique, to the shores of the Red Sea and the Persian Gulf. Zanzibar would serve as a hub for this traffic for centuries.

In West Africa, the Arab slave trade covered a vast area from the Niger Valley to the Gulf of Guinea. This traffic was on the roads south of the Sahara. The crossing can take up to three months with a high mortality rate due to the poor conditions of the journey. Here is the witness of the German explorer Gustav Nachtigal: “The poor children of the black lands seem to die here, in the final stages of a long, hopeless and painful journey.”

He continues that “the long journey carried out with insufficient food and scarce water, the contrast between the rich natural resources and humid atmosphere of their homeland and the dry and airy air of the desert, the fatigue and hardships imposed by their masters and by the conditions in which they find themselves, has gradually ruined their young strengths”.

“The memory of their homeland that has disappeared along the way, their fear of an unknown future, the endless journey under the blows, hunger, thirst, and deadly exhaustion have paralyzed their last faculties of resistance.”

“When the poor creatures are not strong enough to get up and walk again, they are simply abandoned, and their minds slowly fade Under the destructive effect of the sun’s rays, hunger, and thirst,” Gustav concluded.

The Arab slave trade was characterized by terrible violence, castration, and rape. The men were systematically castrated to prevent them from reproducing and becoming a stock. This inhumane practice resulted in a high mortality rate: six out of ten mutilated people died of their injuries. The Arab slave trade also targeted African women and girls. They were captured and transported for use as sex slaves.

Some historians say that the Arab slave trade has afflicted over 17 million people. In the Saharan region alone, more than nine million African prisoners were abducted, and two million people died on the roads.

Islam justified this contemptible phenomenon because Christianity would later approve of the transatlantic slave trade. Thus the Tunisian Arab historian Ibn Khaldun (1332-1406) wrote: “the only peoples who accept slavery are the Negroes, because of their lower degree of humanity, their place closer to the animal stage.”

The Algerian Arab theologian Ahmed Al-Wancharisi (1430/1431-1508) has made legal and religious recommendations: “I have been asked about slaves from the land of Abyssinia who profess monotheism and accept the rules of holy law: is it legal or not to buy and sell them?… If their conversion to Islam comes after the establishment of a property right [on these slaves], then Islam does not demand liberation because slavery was caused by disbelief. The state of servitude continues after the disappearance of disbelief because of its existence in the past.”

When they reached the destinations, the prisoners were sold at slave markets in Cairo, Baghdad, Istanbul, Mecca, and other centers. These slaves played different roles in the economy of the Muslim world. They were used as servants, Harem guards, workers in fields, mines, and hydraulic yards, and as cannon fodder in armies.

Poor treatment sometimes led to rebellion. For example, the revolution of the Zanj, which took place near the city of Basra in Iraq in 869, lasted 15 years. Under the command of Ali Ibn Muhammad, slaves from East Africa and the Great Lakes region took over power over many cities and founded an embryonic state. They were not defeated until 883.

The Arab slave trade had a baleful influence on the development of African societies. Some areas were destroyed and depopulated. Henry Morton Stanley (1841-1904) was a frightened witness to this traffic. He wrote that after the distress of the Arab traders, “the black blood flows north, the equator smells corpses.”

The Arab slave trade also promoted the development of racist and essentialist theories that blacks naturally regard as inferior. This racism still exists in many Arab countries; for example, the same words are used to describe Africans, blacks, and slaves.