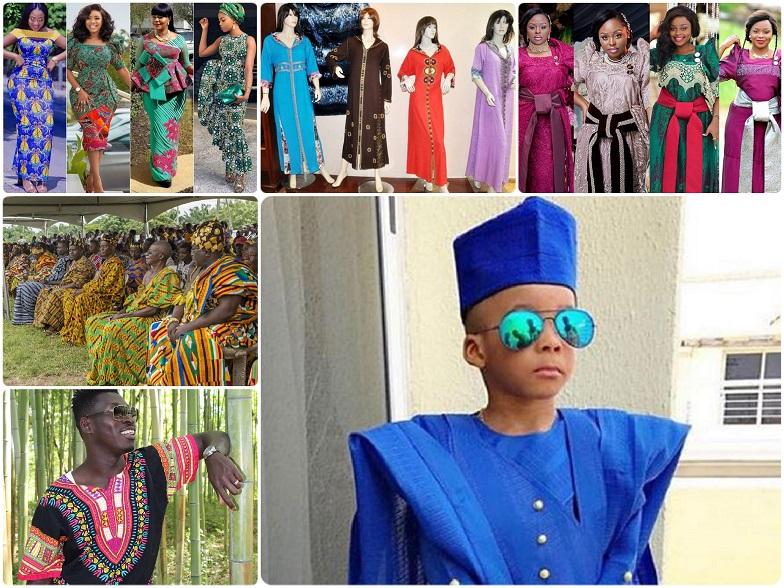 Clothing ranges from brightly coloured fabrics to abstractly embroidered robes to colourful beaded bracelets and necklaces. However, Africa is such a large and diverse continent, and traditional dress is different in each country.

Many West African countries have “distinct regional clothing styles that are the products of long-standing textile crafts in weaving, dyeing, and printing”. However, these traditions are still able to coexist with Western styles.

In African fashion, there is an excellent contrast between rural and urban societies. Urban societies tend to be more influenced by trade and the changing world, while recent Western trends take longer to reach rural areas.

Very early African clothing may not have been well suited to the usually hot climates. Such as Aprons made of animal skins, furs and feathers, and bark mainly tied around the waist and robes thrown over the body by men. Women wore wraps around their waists or breasts, often decorating the rest of their bodies with scarification and ochre paint.

Stone Age man continued to make cloth from the bark by removing the bark from trees and then pounding it with a stone until it was thin and pliable. Small pieces would be sewn together with leather or raffia to make larger pieces to cover the body.

The earliest evidence of textile production appeared at Igbo-Ukwu and consisted of excavated fragments of undyed bast cloth dating from the IX century. (The best plant fibre derived from the phloem, the inner bark.) The discovery of the Tellem caves in Mali revealed funerary monuments from the 11th and 12th centuries, in which fragments of indigo-dyed cotton and wool cloth found.

And then, around the 15th century, trade began in Africa, and the sea routes between Europe, Africa and the East were open. Exotic objects arrived on the continent and began to be covered by the locals to decorate their local dress. Shells, beads and buttons started to appear on clothing, either as ornaments or making up the whole garment, as beaded aprons, capes, headbands, and shoes.

Indifferent places, various methods of weaving were developed, some more progressive than others. Fibres of cotton, raffia, silk, and wool were used. The woven and embellished fabrics used for African dress reflected the status of the tribe, its socio-economic status, culture, environment, and climate.

Ethnic styles are a versatile and informative way to represent what African clothing and culture is all about visually. African dress is ideal for those who want to connect with both past and future generations.

Dashiki is a loose-fitting shirt with long or short sleeves and a richly embroidered V-collar that is unisex and comes in many lengths, colours and shapes. It often combined with tie-dyed pants. Dashiki clothes are worn on formal and informal occasions, as well as for various ceremonies.

Agbada is the Nigerian version of boubou in the Yoruba language. It is a long, loose-fitting, often embroidered dress with wide sleeves and a hole in the head’s centre, usually worn by Yoruba men. It was worn over a long-sleeved tunic (Buba) and long tied pants (Sokoto) and accompanied by a hat (chechia) that matched the garment.

Kitenge or chitenge is a central African, East African, and West African fabric similar to a sarong, often worn by females and wrapped around the chest or waist, over the head as a scarf or as a baby sling. Kitenges are colourful pieces of fabric.

Kente is made from a fabric that is a type of silk and cotton. The material is made from interwoven strips of cloth that originate from Ghana. Wearing Kente fabric has become a widespread phenomenon to mark special occasions, with highly sought-after Kente brands led by master weavers.

The dress was presented by the Goan designer Caetano Gomez, then living in Uganda, which was a British protectorate.

“Gomesi” is a bright, floor-length fabric dress with a square neckline and short puffy sleeves. The dress tied with a belt below the waist above the hips. The gomesi has two buttons on the left side of the neckline.

Djellaba means a mid-calf or (more often in the early 2000s) ankle-length, loose-fitting dress, a shirt or garment worn in various Arab societies and among other Islamic groups. In most cases, it would be made of cotton, though less frequently of silk or woollen fabrics. The garment, denoted by the related terms jilbab, jillaba, and gallabiyya, is similar in form and worn as traditional secular clothing throughout the region but takes on a special meaning with the modern Islamic context.

These designs are a form of expression of everything from family status to popular culture to religious beliefs and politics. In past years, this hardy, lightweight fabric has become very fashionable and has even made its way into high-end design brands. Its use has gone beyond just wrapping to being used as a base for hats, bags, shoes and all sorts of clothing,