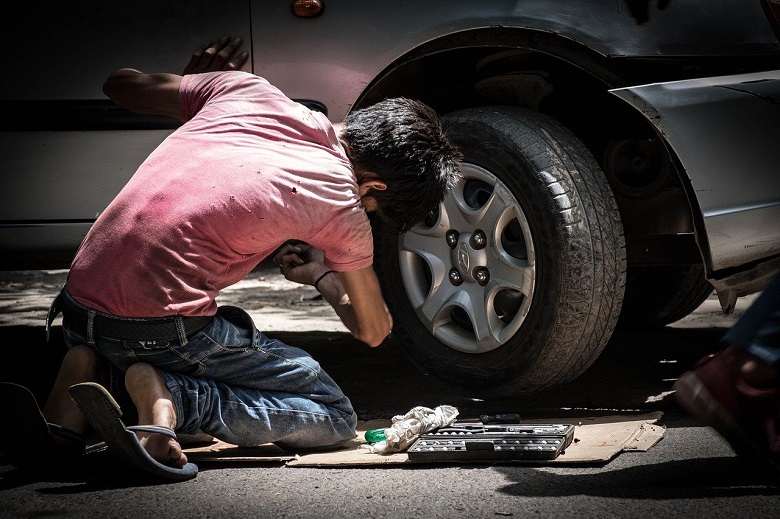 There are still many countries where, instead of school, children go to mines and factories. Over the past decade, child labor on cocoa farms in these African countries – Côte d’Ivoire and Ghana – have increased, despite promises from the chocolate industry to take measures against it.

Childhood is the happiest period in every person’s life; it is a carefree time when the only responsibilities are study and good behavior. But, alas, many children live in entirely different conditions and are forced to work early. Child labor disfigures any civilized society, so many countries in the last century introduced laws restricting the work of minors. Unfortunately, because of extreme poverty in many developing countries, child exploitation does not seem out of the ordinary.

1. The Democratic Republic of the Congo

The world’s media drew public attention to the inhuman working conditions in which children in the DRC force to work. This state is the largest supplier of cobalt required for the manufacture of smartphones. But for children in Western countries to play with new gadgets, thousands of children on the African continent risk their lives in mines every day.

According to the UN, about 40,000 children work in the DRC’s cobalt mines alone. In the unbearable heat, shrouded in clouds of red dust, the guys work at a depth of 200 to 300 meters in the twilight, risking suffocation or death under the rubble. For a shift that can last more than 20 hours, they earn less than $ 2, and many do not even get half that amount.

In addition, rebel and military groups report abducting children, forcing them to take up arms and engage in internecine conflicts. The government is taking constructive steps to eliminate these problems, but there is no need to talk about improving the situation.

Many parents’ approach to parenting in Zimbabwe will not be to everyone’s liking: they send their children to beg on the streets so that they bring something to the family budget from an early age. Growing up, children are looking for more severe sources of income; many become agricultural workers and are engaged in tobacco harvesting. Children expose to nicotine and toxic pesticides, and many show signs of poisoning from constant exposure to tobacco leaves.

The mining industry is another sector where children often work. Despite the existence of special programs designed to fight for the elimination of child labor, in reality, they do not bring real benefits.

In west Africa, Nigeria has the highest number of minors working. In rural areas of the country, children are mainly involved in the cultivation of tobacco, cassava, and cocoa. In urban areas, they work as shoe shiners, street vendors, hairdressers, tailors, etc.

UNICEF Nigeria is currently developing solutions to this problem, but no positive changes have been achieved in recent years.

In Yemen, almost one in ten children forced to work, and the situation continues to worsen. Meanwhile, the government does not see child labor as a significant issue. Most child laborers concentrate in rural areas, where their unskilled and cheap labor widely use. The situation became especially aggravated after the civil war when many children left orphans without a livelihood, which unscrupulous employers actively used.

Burundi is a small African landlocked country. It is consistently among the five most impoverished countries in the world. Burundi has a host of internal problems, including corruption, political instability, and epidemics. Against this backdrop, child labor may not seem like a big deal. Meanwhile, thousands of children every year lose their health and lives in hazardous jobs.

In Burundi, almost every fifth child force to work to help their relatives. Girls work in wealthy families as domestic servants and boys employed in agriculture.

For many years, chaos and lawlessness reign in Somalia, the government does not control the political situation, all social institutions paralyzed. In the conditions of de facto anarchy and endless war, few people care about the problem of child labor. Somalia does not have any restrictive juvenile employment legislation, so the ugliest forms of child exploitation are common. Children of primary school age can found in the most challenging and harmful industries and, worst of all, in numerous gangs and groups with a gun at the ready.

In Eritrea, child labor is not just not prohibited; it is mandatory! Students must work for at least two months a year during their studies. Poverty and the precarious situation in the country are the main reasons for the spread of child labor, which is not even considered a social problem here. Among other things, in Eritrea, the number of children living on the streets is growing every year, and they are easy prey for traffickers and pimps. Not only the rights of children but also of human rights, in general, are not adequately respected in Eritrea.

About 30% of Afghan children aged 5 to 14 forced to prevent their families from starving to death. And the sad thing is that most of them are almost the only breadwinners in the house. Afghanistan is a country with a devastated economy, unstable politics, and persistent military disasters that exacerbate endemic poverty and are the leading causes of the spread of child labor.

In the metallurgical industry, children work in brick factories as tinsmiths and welders, in mines, in agriculture, street vendors, shoe shiners, or beg.

Like Afghanistan, this country still suffers from the devastation caused by war and economic uncertainty. Almost one-third of children between the ages of 10 and 14 have to work. Naturally, we are not talking about decent wages or the relative safety of working conditions, so hundreds of children are injured and killed in production every year.

Although education in Sudan is free, it remains inaccessible for many children. These are especially true for girls from rural areas who cannot go to school, as they have to help their parents and carry out many household chores.

According to some reports, in Myanmar, most minors are put underarms, as frequent ethnoreligious conflicts constantly aggravate the political situation. Also, children become victims of the slave trade both within the country and abroad.

The spread of the exploitation of child labor provokes by the general poverty of the population and the need for unskilled labor. Almost half of the 1.2 million working children in Myanmar are employed in hazardous industries, while labor laws consider only those working in factories.