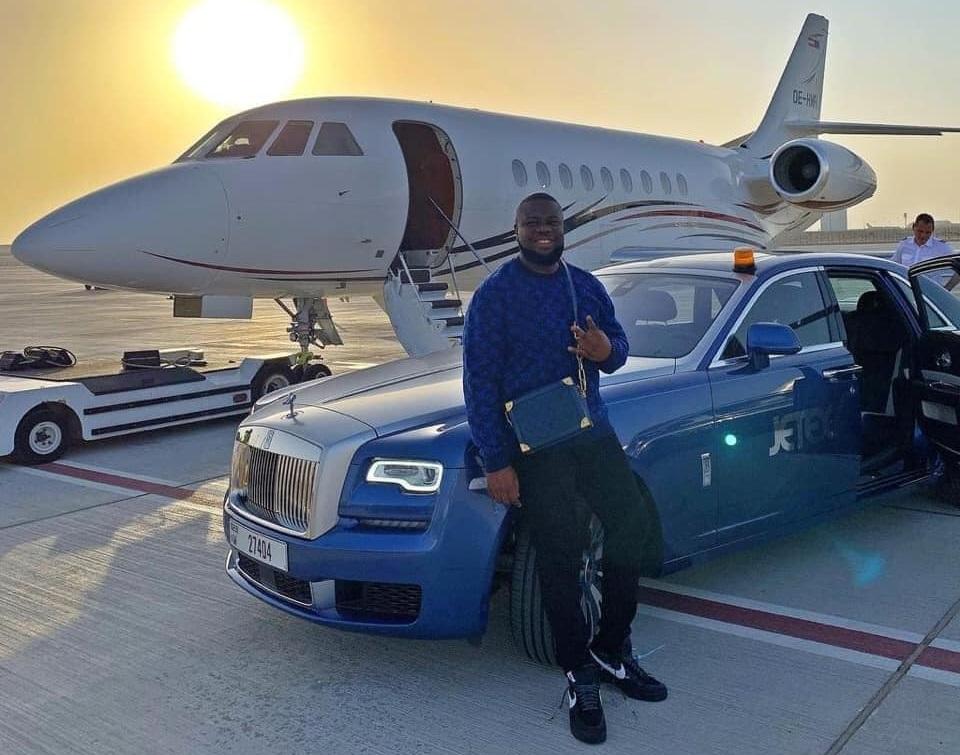 The real name is Raymond Igbalodely. He is also known as Aja Puppi but fondly called Hushpuppi. A notorious fraudster and social media celebrity, popularly known as Hushpuppi, appears before a US court to face several criminal charges.

While Raymond Igbalodely alias Hushpuppi describes himself as a real estate developer, he hasn’t fully revealed how he earns money to afford his chic lifestyle. He joked once that he’s a beggar by profession. The source of Hushpuppi’s wealth is a bit of a mystery. Still, many believe he invested in property and other lucrative ventures, not until recently, the ugly wind of exposure revealed his full source of income.

Raymond Igbalodely became famous based on the photos and videos he shared on Instagram and Snapchat. His wealth hypnotized many. He often posted his Gucci clothes, private jets, luxury cars, and expensive trips around the world on his social media pages. Despite his wealth, Hushpuppi describes himself as a humble man.

He once motivated the black people on his page, and he wrote: “To every young black child out there … where you get in life is [up to] you – the hard work you put in, the passion, the love for what you do. Respect people, be humble to people, show love to people, be kind – it takes you far in life,” he said in an Instagram video.

It is one of the biggest cyber fraud scams in Nigerian history. The Hushpuppi was arrested in Dubai, and the Police published their official account of the arrest of Ramoni Igbolade. It is said that the FBI and Dubai Police have followed him for six months before his arrest. They revealed a staggering amount of money his gang has made defrauding over 1.9 million individuals across Europe and the Middle East.

Items seized from Hushpuppi & his team by Dubai Police:

Dubai Police believed that he has moved up to $430 million in 3 years! This is the most significant cybercrime case in the world at the moment!

Why Hushpuppi was arrested

One may be wondering why about 60 Interpol and FBI agents stormed Dubai to stop popular social media sensation Hushpuppi and Woodberry in their plush hotel in the early hours. With the kind of lifestyle that the duo is displaying on social media, Nigerians are wondering what kind of work these two are in, with hundreds of thousands of dollars worth of clothes and accessories purchased by these guys daily.

After the arrest that sent the social media into a frenzy, it was revealed that they successfully intercepted a deal worth more than $100 million that the US government was paying to buy ventilators for COVID-19 patients in their native America.

They have a unique programming tool used to hack into e-mails and monitor large transactions between companies. They got wind of the discussion between the US government and the manufacturer through an e-mail and waited until it was time for the payments to be made. All they did was intercept the manufacturer’s e-mail and cleverly entered their account number without the knowledge of both parties.

After this deal, Hushpuppi bought a Rolls Royce Cullinan 2021 worth over $500,000 and also a Villa; this purchase triggered the American authorities as they were trying to track down several Internet fraudsters who had been on multi-million dollar scam offers for the past few years. Interpol and the FBI stormed their plush home in the United Arab Emirates and arrested Hushpuppi and Woodberry. They were flown to Washington to answer for their crimes.

It is understood that the Huspuppi faces criminal charges bordering on conspiracy to launder hundreds of millions of dollars of compromised business e-mail (BEC) frauds and other Internet scams. His crimes include schemes that allegedly saw him and his ring members target a US law firm, a foreign financial institution, and an English Premier League club.

The FBI has revealed that Hushpuppi and his associates use compromised e-mail accounts or separate fraudulent accounts to communicate with staff at a victimized company, enticing them to make an unauthorized transfer.

In a scam involving a New York-based law firm, Hushpuppi and his team allegedly undertook a scheme that defrauded a client of approximately $922,857 in October 2019.

He is also alleged to have conspired to launder funds stolen from a $14.7 million cyber-hold-up from a foreign financial institution (name withheld) in February 2019, sending the loot to various bank accounts around the world.

The FBI affidavit also alleged that Hushpuppi conspired to launder hundreds of millions of dollars in other intrusions, including a scheme to steal £124 million from an English Premier League club. While Hushpuppi is presumed innocent until proven guilty beyond a reasonable doubt, the beleaguered fraudster would face a legal maximum of 20 years in prison if convicted.

Nigerians didn’t spare him either. The painful thing is that people all over the world will almost and always associate every Nigerian with fraud. But let us act sanctified today and condemn fraud and corruption. It’s also interesting to note that after Hushpuppi denounced being a citizen of Nigeria, I don’t think it’s fair to brand him as a Nigerian anymore.

Nigerians are neither participants nor beneficiaries of his fraudulent act. Interpol had Hushpuppi in their sights for many years and allowed him to build the overwhelming evidence they needed. His “fans” have also fanned his flames by constantly saluting him on social media. I don’t think Nigerians ever believed that Hushpuppi’s money was legitimate.

The lavish lifestyle, showing off, and so many other things made it visible. The truth is that the scam has levels, and it is in real trouble now. After scamming or doing everything he does to make money, he comes online to preach hard work and resilience.

Illegitimate sources of wealth will always come back to haunt you. Now, there is a ripple effect to the saga that this news has destroyed much for remote workers. There’s a report of a man who was turned down by five foreign clients because he’s a Nigerian.

The tastes of Hushpuppi, Mompha, Woodberry, and other scamming cliques make young Nigerians scrambling for legitimate money look stupid with their extravagant lifestyle. Gullible fans believe Hushpuppi is in real estate, selling and buying real estate in Dubai at affordable prices. And the money he makes doing this, he donates it to charity by buying clothes and shoes from Gucci and sending them to Nigeria.

Integrity is the main issue when it comes to fraudulent misconduct, and the standard of living is deficient among 90% of the Nigerian population. We are currently being bombarded by a new generation of poorly educated people who are cultured to look at these “fraudsters” as “role models”.

One might generally agree, however, that Nigeria has become a society that tolerates fraud and corruption. I condemn ill-gotten wealth and any form of criminal activity, especially fraud; you are at the back of your laptop and defraud people of their sweat and savings. This is another level of wickedness.