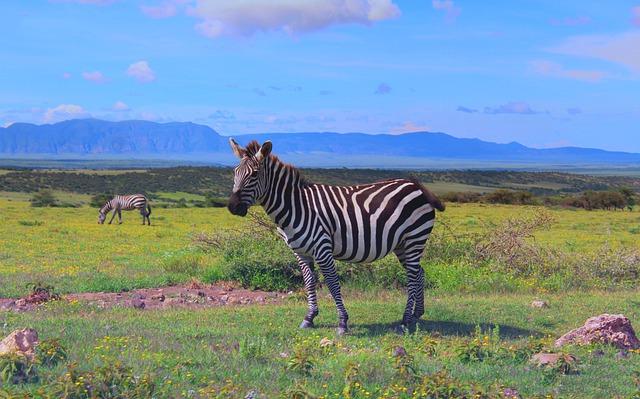 There is a fantastic place in the distant and mysterious Tanzania that can be safely called the modern “Noah’s Ark”. The territory of the Ngorongoro crater inhabits over twenty thousand amazing animals.

The rarest black rhinos, elephants, zebras, flamingos and more than 20 thousand amazing animals and birds live together on the territory of the Ngorongoro crater, formed as a result of the volcanic eruption. This is the largest concentration of a wide variety of animal species in all of Africa.

What did the eruption of the volcano lead to?

About two and a half million years ago, there was a violent volcanic eruption in this part of Africa. As a result, a caldera was formed – a huge round and flat area, surrounded by something like walls over 600 meters high. This crater-pit with about 260 km² gradually became a natural reserve, including acacia forests, meadows, marshlands, and even a large salt lake.

The eastern part of this natural “bowl” is more prone to rain; therefore, it is densely filled with trees, and two lakes and a spring facilitate the formation of swamps. On the western, arid side of the crater, the area is almost deserted and ideal for grazing. This great natural diversity has contributed to the fact that Ngorongoro gradually filled with tens of thousands of animal species over time.

The densest population of predators and more

The big “African five” gathered here in full force: a lion, a leopard, a buffalo, an elephant, a rhinoceros. By the way, about the latter. The black rhinoceros is a rare animal on the verge of extinction – it still lives here, in the cozy savannas. And although it is not easy to meet him (only a few dozen black rhinos were recorded in the pit), some photographers still manage to do it.

Of course, these animals are afraid of humans and keep aloof, but if such a giant nevertheless meets on the way of the car, it can be dangerous for the tourists themselves. After all, he has such strength that he can easily turn over a jeep.

Hippos, crocodiles, zebras, antelopes, hyenas, monkeys coexist here in their natural environment, as if on a huge circus arena. And, no less surprising, they are very convenient to watch. The fact is that on the “sides” of the crater, at the top, there are many luxury hotels. The owners have made open balconies and verandas for the guests, which are the most real viewing platforms.

Sitting in such a cafe overlooking a giant picturesque pit, watching zebras graze in the distance and huge flocks of pink flamingos fly, is like visiting an animal circus. Only not trained, but wild.

It is not easy for most animals to leave this large crater because of its high “sides” – that is why such a unique microclimate with an incredibly diverse fauna was formed. But it is not difficult for a guest from the hotel territory or for a tourist who has specially arrived from afar to go down to the bottom of the pit. Mainly desperate tourists go on safari in cars to see rhinos, lions, elephants up close.

And lovers of wild African tribes do not miss the opportunity to drop into the Masai aborigines. In the neighbourhood with wild animals, these people live here in the area, as they did many years ago – with their ancient way of life and distinctive African mentality. So the presence of guests from another – modern – world does not even bother them.

Moreover, the Ngorongoro Masai are profitable for tourists because the locals persistently offer them to buy African souvenir trinkets and pose for the camera. By the way, the entrance to the Maasai settlement is paid. And on the Ngorongoro Reserve website, there is a warning that taking pictures of the Maasai without official consent outside the settlements – for example, if you meet them on the side of the road, passing by – is considered flawed. And why would that be, I wonder?

There is no end to tourists

Despite the fact that visitors to this unique reserve can be trapped by malaria, which is quite common, this does not stop tourists. A large number of cars may soon become a real problem for this reserve. Furthermore, the natural balance is also disturbed by the surrounding shepherds who come to graze the herds on the territory of the crater, causing damage to the vegetation.

In 1979, Ngorongoro Crater was included in the UNESCO World Heritage List as an outstanding natural monument, and in 1981 it was recognized as a biosphere reserve.