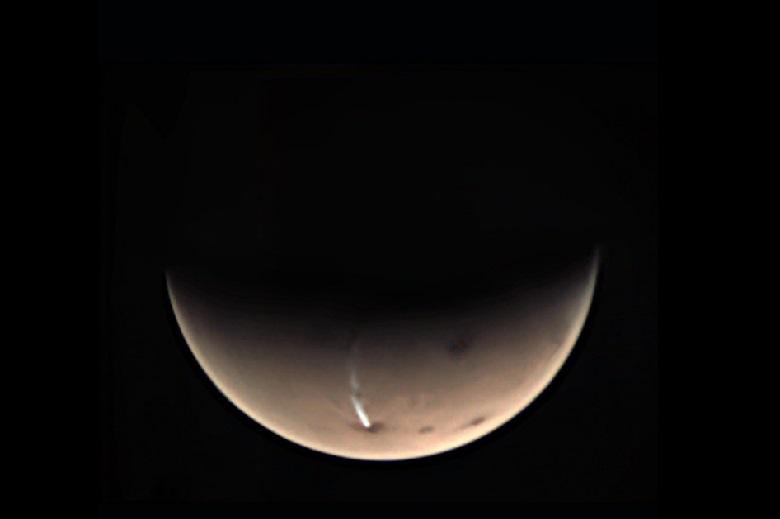 Scientists have taken several pictures of a cloud extending over the planet Mars on the edge of a volcano. Scientists are wondering about this phenomenon, which occurs at regular intervals.

A camera from the Mars Express probe, launched by the European Space Agency (ESA), spotted a strange cloud on Mars.

The ship carrying the Perseverance rover took off for Mars, reports the organization in a press release. This phenomenon occurred over Arsia Mons, a volcano nearly 20 km high.

However, this is not a plume of smoke-related to volcanic activity, but a cloud of ice. It extended over 1,800 km and formed on the slopes of the volcano, on the side opposite the prevailing winds.

This type of cloud has already been observed on the Red Planet. The phenomenon occurs every Martian year (lasting about 687 days), at the time of the southern solstice – which corresponds to our winter solstice. Every morning for about 80 days, the cloud forms before dissipating after three hours.

“We have studied this fascinating phenomenon, and we expected to see such a cloud formation now […] However, we do not yet know if all clouds are as impressive as this one,” explains Jorge Hernandez-Bernal, from the University of the Basque Country, in a statement from ESA.

The Mars Express probe was able to take images of the entire cloud thanks to its wide-field camera and its ‘very elliptical’ orbit, which is not the case with all the devices orbiting the Red Planet, the ESA press release said.