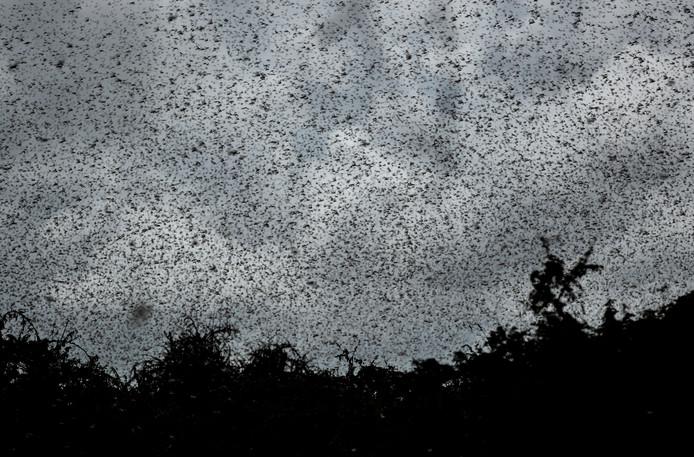 Kenya is currently experiencing the worst plague of desert locusts in 70 years. With hundreds of millions, they enter the East African country from Ethiopia and Somalia. They destroy farmland and threaten an already vulnerable region with famine.

The buzzing of millions of locusts is interrupted by the screams of farmers and the noise of pots and pans. But the voracious insects will not be held back from their feast in the Kenyan rural village of Kititika. “Even the cows wonder what’s going on,” says Ndunda Makanga, who has been hunting locusts off his farm for hours. “Corn, sorghum, beans; they ate everything.”

The pink insects eat whole trees bare and then continue flying hungry. Children run around, waving blankets and pulling on branches to scare the grasshoppers, the size of a finger. A woman is attacking them with a shovel.

And it’s far from over. If the rains come in March and with the new vegetation, the swarms can grow up to 500 times more massive. It is only in June that the drier weather can reduce them, says David Phiri of the United Nations World Food Organization. “Even a small swarm can consume the food for 35,000 people in one day. Something must be done immediately.” It takes, among other things, about $70 million to send more insecticide planes into the air. It’s the only way to fight the plague effectively. Now there are only four planes in action.

In Kenya, over 70,000 hectares have already been destroyed. According to local authorities, a single swarm can count 150 million locusts per square kilometer of agricultural land (i.e., 250 football fields). A massive swarm in northeastern Kenya was 60 kilometers long and 40 kilometers wide. Carried by the wind, insects can sometimes travel up to 100 miles a day. It looks like a little plane floating in the air.

“The local population is terrified,” says a government official. “Those locusts can eat anything, including the cattle feed. I’ve never seen so many of them.” He fears, especially the moment when the locusts lay eggs: then there will be another generation to come.

The swarms are now heading towards Uganda and the vulnerable South Sudan, where half the population has been starving since the end of the civil war there. The locusts are also on their way to the Rift Valley in Ethiopia, the Food Shed of the second-most densely populated country in Africa. “The situation is terrible,” says Buni Orissa, a resident of Sidama, a region in Ethiopia. “The locusts love cabbage and beans.”

This jeopardizes the already fragile food safety in the area. Before the plague of locusts, nearly 20 million people were threatened with hunger by droughts and floods. There’s hardly any herb washed against the insects. “There have already been huge nets, flamethrowers, lasers, and enormous vacuum cleaners,” according to the World Food Organization.

“But they’re not being used against the locusts now. They are eaten by humans and birds, but not nearly enough to have any effect.” She came up with some recipes anyway. Like this from Uganda: first herbs with chopped onion and curry powder, and then baking.