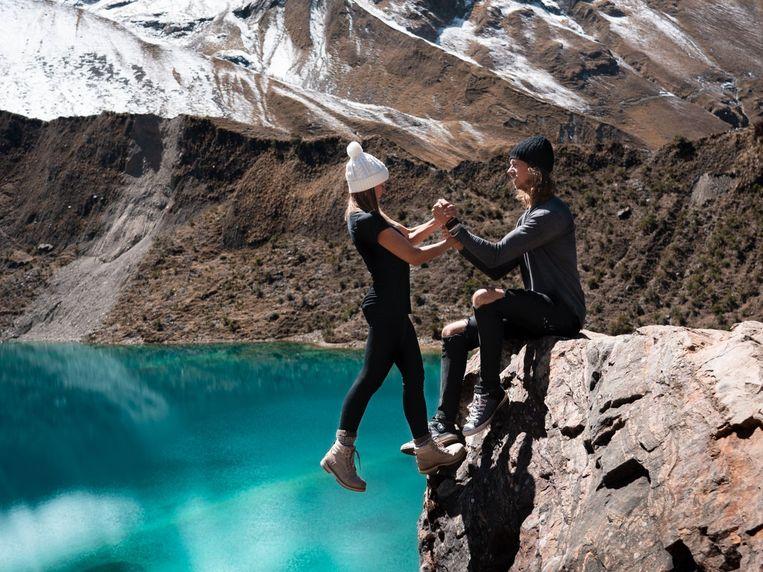 Once again, a reckless photo of an American Instagram couple stirs up dust. This time we see Kody Worman holding his girlfriend Kelly Castille while she dangled over the edge of a cliff with a cheerful look on her face.

In the spring, their photo at an infinity pool in Bali caused anger on social media. On that snapshot, you can see how Kelly hangs over the abyss, while her sweetheart is holding her on the edge of the pool. Even now the couple says they don’t understand all the commotion. “The photo is harmless,” they say to various American media.

The couple, better known under their Instagram name Positravelty, posted the mountain photo at the end of August. “The world is waiting for you!… We urge you to take a chance, to push past barriers of negativity and oppression of self-fulfilment and paint the picture of who YOU want to be. Never let yourself be beat down for living your life by those too afraid to live their own,” the mountain photo stated. “We know which side we would rather be on, do you?”

Although the influencers deny that they have put themselves at risk, they are nevertheless overwhelmed by an avalanche of adverse reactions. “What idiots. They encourage other travelers to imitate this kind of infantile thing,” wrote one of them in the post. “They should have crashed down. Natural selection,” says another.

“We often play with perspective, so we expected our followers to understand it by now,” they say to CNN, among others. “We didn’t expect to get that much criticism.”

Last year it was announced that 259 people died worldwide while taking a picture in a dangerous place or during a stunt. That’s what researchers from the All India Institute of Medical Sciences wrote in the journal ‘Journal of Family Medicine and Primary Care’.

They researched news reports about fatal self-portraits in the period of October 2011 – November 2017. Drowning is the leading cause, usually because people are swept away by violent waves in the sea or fall off a boat. The second cause is summarised under the heading ‘transport’ and concerns people who want to take a quick picture of themselves in front of an approaching train. Burning and falling from a great height together form the third cause of death.

In the United States, most of the selfish deaths occur among people who accidentally kill themselves with a firearm.