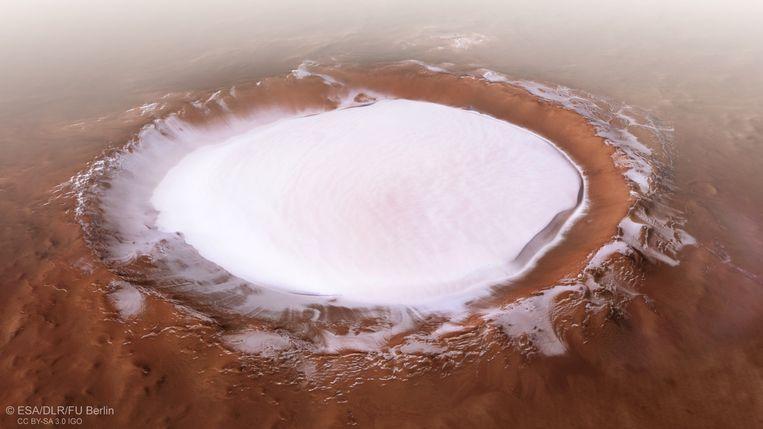 The Korolev crater on Mars is 82 km wide and over a diameter of about 60 km there is a thick water ice layer of an estimated 2 km. Good for a volume of no less than 2,200 km³. Fantastic photos from space agency ESA show the impressive ice crater. With us, a white Christmas is not for this year, but on the red planet that is indeed the case.

The space mission Mars Express has produced spectacular images of the crater on Mars. The European Space Agency (ESA) released the images yesterday. “This image seems to depict a large plain of untouched snow – a dream for every lover of the end of year”, it sounds in the attached communication from the ESA. In reality it is a gigantic crater on Mars, filled with ice, not with snow.

The images of the Korolev crater are made by the spacecraft Mars Express Orbiter. It has been in orbit around the red planet since Christmas 2003. The ESA therefore calls these images “a fantastic celebration of this important milestone” of fifteen years ago. Actually, these are five photographs that were combined into one image, the organization clarifies.

The crater is no less than 82 kilometres wide and the deepest point should be about 2 kilometres. According to the ESA, it is an “exceptionally well-preserved Marskrater”. The space organization also explains that the crater is filled with ice by a so-called ‘cold trap’. The air that blows over the crater is pulled down by the ice and drops in temperature. As a result, there is a permanent cold air layer above the ice that could never melt. Not even in summer – Mars has seasons like the Earth – because air is a bad heat conductor and works as a sort of protective shield.