Former First Lady Michelle Obama (54) pulled a dizzying pair of boots from her walk-in closet for a book presentation in New York yesterday. Fashion gurus do not stop talking about the thigh high glitter boots of the Spanish brand Balenciaga. A price tag of 4000 dollars is attached to the special footwear.

Michelle discussed the choices she made as the first lady and excerpts from her recently published book Becoming with Hollywood star Sarah Jessica Parker. The Sex and the City actress disappeared when the audience at the sold-out Barclays Center in New York’s Brooklyn district saw how Barack Obama’s wife made her entrance in a canary-yellow silk dress.

The creation had a split at the front so the thigh-highs of the 1.80 meter long. Michelle were not to be missed. According to Cosmopolitan Magazine, all other shoes in the world are worth nothing from now on. “RIP for my shoe collection, all other boots are now dead for me,” judges journalist Mehera Bonner.

If you want to be glamorous during the Christmas dinner, you can go to Balenciaga. The golden ‘knife over the knee boot’ is still available. “This striking pair is made from stretchy stretch material and cut into an over-the-knee silhouette with a razor-sharp point toe and a towering stiletto heel. Add an unexpected sparkle to a completely black ensemble”, is the sales text. Meanwhile, thousands of photos of fashionista Michelle Obama are being distributed on Twitter. 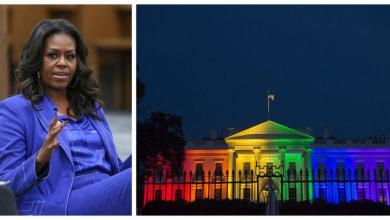 How I escaped from White House – Michelle Obama 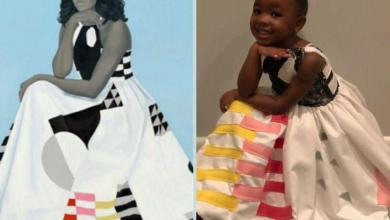 Cute: Parker Curry dresses up like Michelle Obama for Halloween