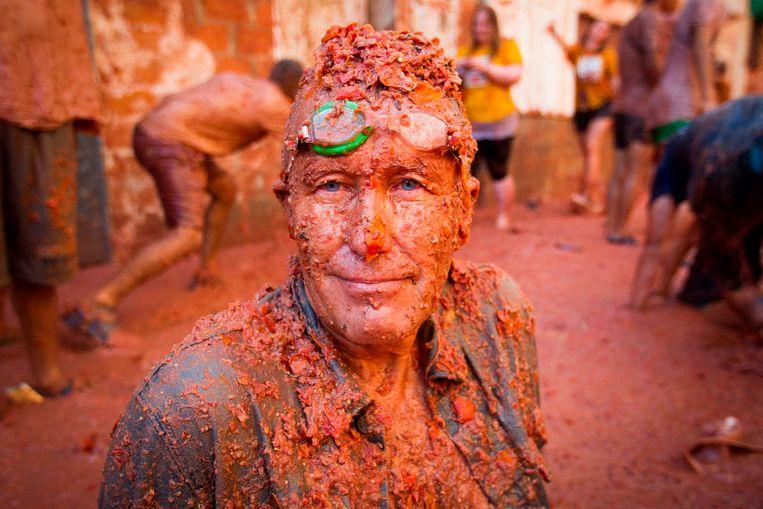 Some 22,000 people took part in ‘La Tomatina’ today in Bunol, Spain. That is the annual tomato fight that attracts participants from all over the world.

On the last Wednesday of August, the village is traditionally colored red-brown 40 kilometers west of Valencia. For an hour, the 9,000 residents and visitors from the rest of Spain and the world compete with heavily over-ripe tomatoes.

This year no less than 150 tonnes of tomatoes were used. That is 5,000 kilos more than last year. According to the Guinness Book of Records, La Tomatina is the world’s largest food fight.

The tradition is not entirely harmless; people have been injured once. That is why the organization provides several tips. For example, it is recommended first to squeeze the tomatoes before they are thrown. That way the blow comes less hard. Entering the battlefield with bottles or hard objects is prohibited. And you should consume alcohol in moderation.

La Tomatina took place for the first time in the forties. The tradition is said to have been born in 1945 when a few young people were arguing at a market because they wanted to participate in a local parade. They were standing near a vegetable stall and tomatoes steel to throw them at the ceremony. The following year the ritual was repeated to become a tradition soon.

Over the past fifteen years, the party has been gaining popularity, especially among foreigners. Together with the San Fermin festivals in Pamplona, they are among the most famous events in Spain. At a particular moment, the number of participants had risen to 50,000. Since 2013, the limit has been 22,000 participants, and people from outside Bunol have to pay 10 euros in the entry.