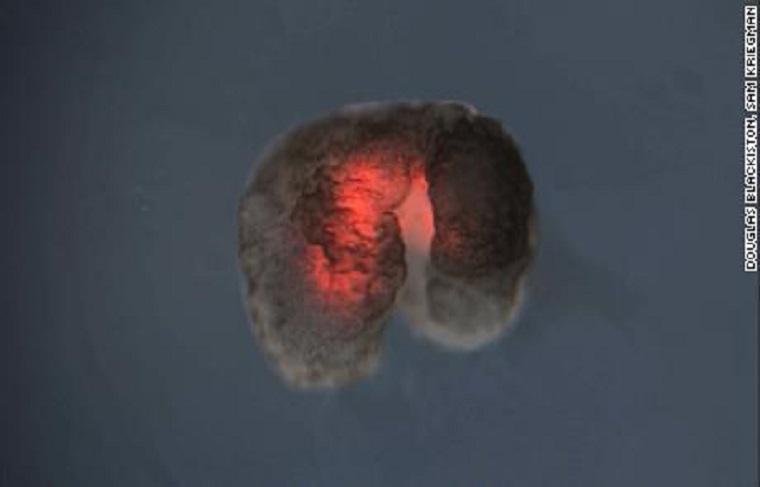 Scientists say they have succeeded in creating a new form of life. It is a living, programmable organism. They started from cells of a frog embryo and modified them to become a controllable machine. “It is neither an existing species nor a traditional robot,” says one of the developers, Josh Bongard of the University of Vermont in the United States. “But the very first ‘xenobot’ or ‘living robot’.”

It would be the very first time that humans have succeeded in turning scratch into a fully biological machine. The discoverers are already writing this in a new paper that was published on Monday in the scientific journal Proceedings of the National Academy of Sciences.

The new organisms were designed by a supercomputer and built by biologists. The supercomputer created thousands of possible designs for the new life form, through a virtual version of evolution. For example, the computer was asked to create something that moved in a specific direction and then tried in countless ways to combine cells by doing what was asked precisely. This resulted in a theoretical design.

A microsurgeon then set to work to put the design into practice. He took stem cells from the embryos of African frogs, grew them and cut them into pieces using ultra-small devices, and then reassembled them in the way the supercomputer had indicated. In this way, a completely new form of life (‘xenobot’ or ‘living robot’) was created, which did not exist in nature before.

Successfully, it turned out. The ‘living robots’ worked as expected. They were able to move on their own, do so in a coherent way and began to explore their environment. According to the researchers, the xenobots also succeeded in spontaneously pushing granules together.

They could also “heal” themselves if they are damaged. And if living robots die, xenobots would be completely biodegradable.

The applications are very diverse, as the paper says. The xenobots could transport drugs through the body of a patient or free veins, but could also detect radioactive contamination or clean up the oceans.

They have been developed at the Center for Regenerative and Developmental Biology at Tufts University near Boston. Science has been changing the way organisms work for some time, but it is only in recent years that significant leaps have been made in that area.

The scientists think that they can make even more complex xenobots. For example, they could equip them with a pouch so that they can transport something.

However, ethical questions arise immediately from the research. Incidentally, the scientists themselves admit that there is danger in the discovery. If the systems became so complicated that people could no longer predict how the new organisms would behave. Not to mention the possibility that the technology could be used for immoral purposes.

This microchip is the smallest flying object ever made by man