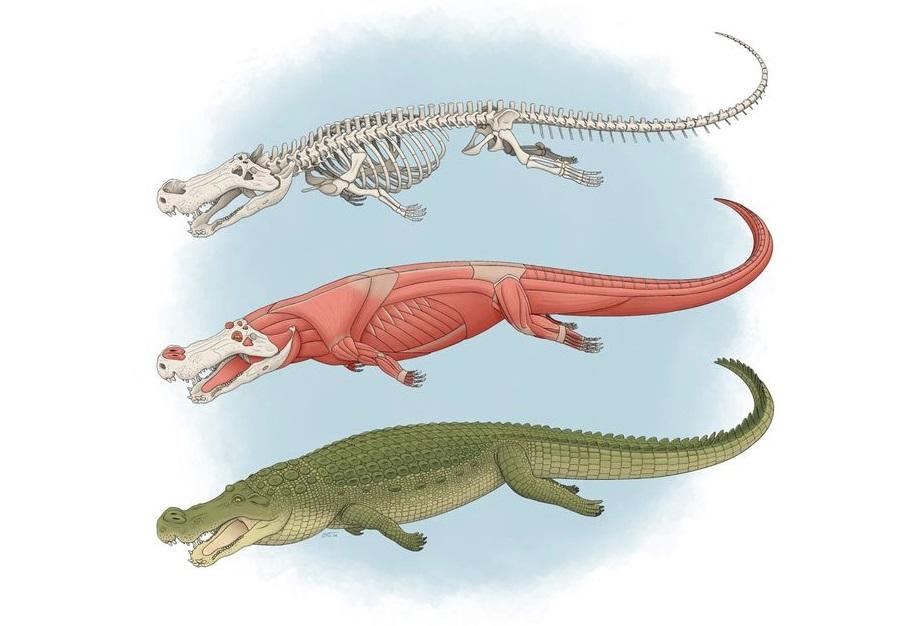 A creature even more impressive than the imposing dinosaur? Meet the Deinosuchus, a crocodile-like monster with teeth the size of bananas. The beast hid in the water and devoured any dinosaur that ventured too close to the shore. As stated in the academic journal ‘Journal of Vertebrate Paleontology’.

The Deinosuchus – which means ‘terror crocodile’ – belonged to the genus of giant crocodiles, lived about 75 to 82 million years ago, and mainly ravaged North America. An adult specimen could weigh up to 1,300 kilograms and grow up to 12 meters in length, which is almost the same as the length of a bus: it was the largest carnivore in its ecosystem.

This made the Deinosuchus a lot larger than its modern descendant, it also had a much larger skull, which meant it doesn’t look exactly like alligators and/or crocodiles. The American alligator – one of the largest reptiles in the world – grows up to 4.5 meters long and weighs up to 350 kilograms.

What the two do have in common is the immense bite force with which they can easily devour their prey. For example, the Deinosuchus may have eaten everything that crossed his path. “Deinosuchuswas a giant who terrorized mighty dinosaurs that came to the waterfront to drink,” said vertebrate paleobiologist and research leader Adam Cossette.

“Until now, little was known about the animal. But in our research, we reveal a bizarre, monstrous predator with teeth the size of bananas.” Those teeth marks were found on both the shells of turtles and the bones of gigantic dinosaurs.

Furthermore, the American researchers discovered that there were at least three species of Deinosuchus on Earth: Hatcheri, Riograndensis, and Schwimmeri. Two species lived in the west of America, a third species ravaged the Atlantic coastal plain.

And although the crocodile-like dinosaur could easily conquer other dinosaurs, it died out before the definitive end of the dinosaur era. Why is as yet unknown. For this reason, paleobiologist Cossette’s research team is continuing the study. In addition, they would like to answer other questions. “There are two big holes at the end of the muzzle,” says Cossette.

“These holes only occur in Deinosuchus, and we don’t really know what they are for. Follow-up research may help us to unravel this mystery and provide further insight into this special animal,” concludes the research leader.