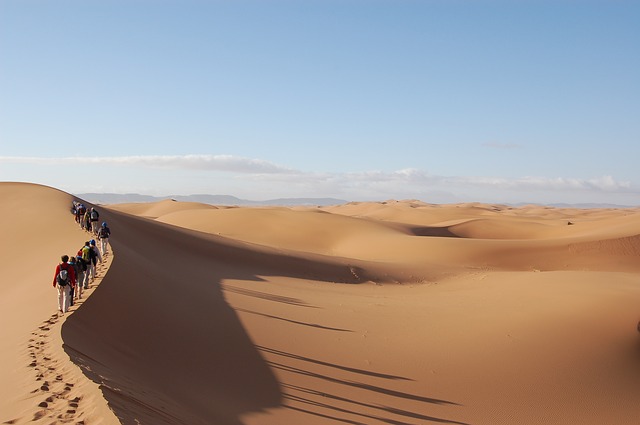 High temperatures occur not only in the summer season but also in winter. And calmness and relaxation come only in the morning when the air cools down. Deaths from dehydration and heat stroke are common in these areas. Therefore, instead of parks, many locals prefer to walk only in shopping centers and live in houses underground.

Extreme heat is even more difficult to tolerate if the air is too humid or polluted. For example, in the Iranian city of Ahvaz, where the temperature rises to 54 degrees, the level of pollution is almost 17 times higher than the norm.

The Dallol settlement is located in Ethiopia’s Afar region and holds the highest average annual temperature ever recorded. From 1960 to 1966, the mean temperature in this area was 35°C. That is, the heat in this region, although not the most terrifying on the planet, does not subside almost all year round. At the same time, the heat comes not only from above – from the sun, but also below – from the Earth, since the Afar region is a volcanically active region located near the Dallol volcano.

Fortunately, today this truly hellish place is considered a ghost town (a mining settlement here in the 1960s). In addition, this is one of the most remote places on the planet, there are no roads, and communication with Dallol exists through caravan routes directed to collect and deliver salt.

Tirat Tzvi is a religious kibbutz in Israel located in the Beit She’an Valley. On June 21, 1942, the highest temperature recorded in Asia record here was 54°C. Even though the Jordan River maintains the fertility of this region, the sun’s rays scorch the valley in summer.

It is believed that Kebili was founded almost 200 thousand years ago. Once upon a time, it was here that caravans arrived in search of cool water and rest – now, the temperature in Kebeli often exceeds 56°C.

Despite its rich history, the city of Timbuktu is gradually receding in front of the looming Sahara Desert. New dunes appear now and then in the town itself, and the streets are often buried under the wind-blown sand. An accompanying problem of the city is the unbearable heat, which rises here above 55 ° C.

The Rub’ al Khali Desert covers the southern third of the Arabian Peninsula. It is located in Saudi Arabia, Oman, Yemen, and the UAE. It is the largest continuous sandy desert in the world and one of the hottest. The temperature rises to 56°C, and the average annual rainfall barely reaches 3cm.

On September 13, 1922, the Libyan city of Al-Aziziyah recorded the world’s highest shade temperature, reaching 58°C. However, this does not mean that El-Aziziya is the hottest place on the planet.

Even though the official record for the maximum air temperature so far belongs to the Death Valley, the top surface temperature of the Earth was recorded in 2005 in the Dasht-e Lut salt desert in southwestern Iran at 70.7°C.