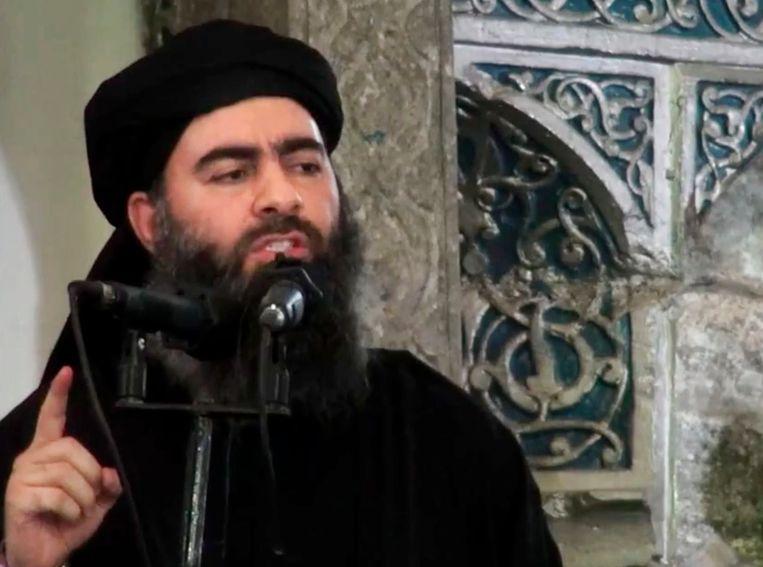 It is no longer possible to keep track of how many times IS-leader Abu Bakr al-Baghdadi has been pronounced dead, but this time it would be for real. US President Donald Trump is about to make a statement on an operation allegedly carried out yesterday in Syria in which ‘the invisible caliph’ would have used a suicide vest. But what do we know about him?

He may be the leader of one of the most feared terrorist organizations ever, but there has always been a haze of mystery surrounding the figure of Abu Bakr al-Baghdadi. The few images of him go back almost all the time when he first appeared in the world public domain: Al-Baghdadi drew the attention of the world on 4 July 2014 when he spoke from the pulpit in the historic Iraqi al-Nuri mosque to believers: He declared himself a caliph, the religious chief of the caliphate that the terrorist group IS had already proclaimed in Iraq and Syria. According to Al-Baghdadi, he descended from the family of the prophet Mohamed, who lived in the sixth and seventh centuries.

The images made that day in the mosque soon spread around the world, as they are some of the few photographs of ‘Caliph Ibrahim’ – that’s what Al-Baghdadi called himself. The new Caliph called on supporters to travel to his area. Thousands of volunteers responded and joined the Sunni jihadists.

As one of the most wanted terrorist leaders in the world, Al-Baghdi did everything in his power not to be caught. Even during meetings with his commanders, he would have worn a mask to remain unrecognizable. He only communicated with (audio) messages that were distributed through those commanders.

The real name of the dreaded terrorist leader is Ibrahim Awwad Ibrahim Ali al-Badri. He grew up in Samarra, north of the Iraqi capital Baghdad. The Iraqi extremist, born in 1971, reportedly had several Salafist preachers in his family.

Baghdadi studied Islamic law in the capital, after which he named himself. How the young clergyman turned out to be a violent jihadist is unclear. The fact is that after the American invasion of Iraq in 2003, he was imprisoned in the American Camp Bucca for a while. He was released in 2004 because he was not considered important. The Americans saw him as more of a troublemaker than a military threat. His other well-known photograph dates from that period.

In 2010, the Iraqi was the leader of the terrorist al-Qaeda in Iraq, or what was left of it. He later split away from al-Qaeda and continued his organization as an Islamic State in Iraq and the Levant (ISIL, also often called ISIS or Daesh). The Levant refers to the old name for the area on the east coast of the Mediterranean, which includes Syria, Israel, Jordan, and Lebanon. The terrorist group, later renamed the Islamic State, ruled at the height of its power over areas in Syria and Iraq where millions of people lived.

Al-Baghdadi is one of the most wanted people on earth and has been on the American most wanted list for several years, with a price of 25 million dollars on his head. However, no one has ever been able to find his hiding place thanks to a smart cat-and-mouse game he played with the Americans, Iraqis, and Russians. According to the Americans, Al-Baghdadi traveled back and forth through the Euphrates Valley on the border of Syria and Iraq and often did so in a single-car, with no more than one driver with him. In this way, he could move around unobtrusively, and every tip about his presence invariably came too late. It was not until May 2017 that it became known that he had left the Iraqi city of Mosul, which was under siege by Iraqi troops and had fled to the countryside in the east of Syria.

Even there, he wouldn’t have thought himself safe and changed his location several times a day. The management of his organization would have been carried out by different couriers, all of whom received different information. In this way, Al-Baghdadi avoided being dependent on a single commander, a tactic that killed Osama Bin Laden.

In February 2018, several sources within the US government reported that al-Baghdadi had been injured in an airstrike in May 2017 and that due to his injuries, he should have left the leadership of IS to others for five months. Meanwhile, the Russians had already reported that they had killed Al-Baghdadi.

In April of this year, he appeared again in a video of al-Furqan, the press agency of IS. On 16 September, Al-Furqan published a 30-minute audio message from al-Baghdadi, in which he called for the women in Iraqi and Syrian camps to be freed.