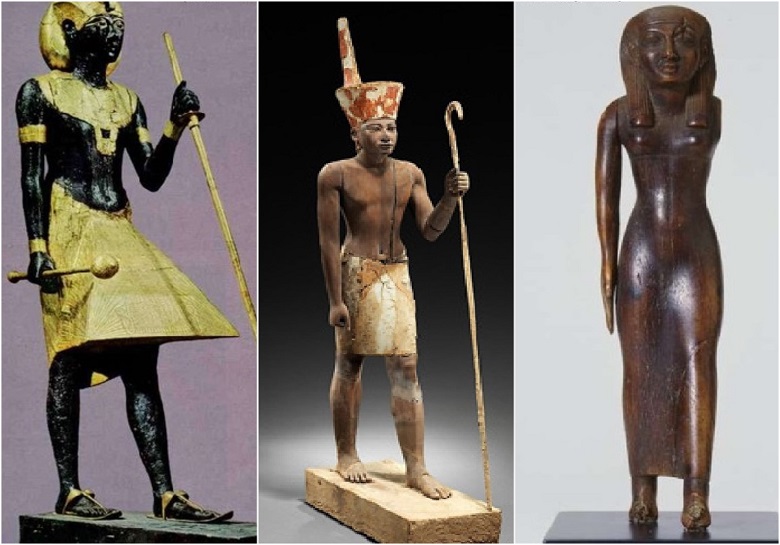 When observing the ancient Egyptian painting or statues, you would easily notice one unique act: the left foot is forward. Why do Egyptian statues have the left foot forward? The reasons.

The step of the statues precisely from the left foot, set for millennia by the ancient Egyptian canon, is one of the unclear questions of art history. This question is one of those that should pique the curiosity of Egyptologists and the public, greedy for the “secrets of Egypt”. Even if the question is not resolved, it seems to have to be a problem and a challenge to inquisitive youth.

In ancient Egypt, the statuary compositions in the Old Kingdom strictly followed a certain number of canonized types. Ubiquitous are standing figures with their left leg extended forward, sitting on a throne or kneeling. The canonical type of scribe statue was widely used.

So, according to most modern researchers of ancient Egyptian art (mainly in the West), the left leg extended forward symbolizes the trampling of the forces of evil. This element is common to almost all ancient cultures, and the same meaning is conveyed everywhere. It is not for nothing that the left leg extended forward is often an indispensable part of all sculptural images of rulers in various regions of the Ancient World.

The statues were supposed to depict the deceased to enable him to use all available benefits freely or to protect the body (if these were statues of warriors or figurines of deities). Since the most ancient, pre-dynastic times, there was a custom to put several dozen small figurines symbolizing slaves and servants in the tomb. The custom of burying wives and servants with the deceased existed only in the richest burials and a relatively late era.

Thus, the cult purpose of the sculpture determined its main features in Egyptian art. Form and material, significant pictorial elements of symbolic importance, were dictated precisely by cult considerations. Already in the statues of the Early Kingdom, the canonical elements of ancient Egyptian sculpture are formed.

Statues of stone or solid ebony (usually anthropomorphic) were installed along the tomb walls, often in front of the entrance to the room where the sarcophagus was walled up. Without exception, all statues were made frontal. Since they were leaned against the wall in most cases, the sculptures from the back, especially the stone ones, were not worked out in such detail as in the front.

The poses of the statues are correct, symmetrical. A characteristic feature of Egyptian sculpture (note in parentheses, as in all ancient Eastern sculptures) is the extended left leg of the statue, especially on the statues of the pharaohs. Two main positions of sculptural images developed quite quickly – full-length and seated, the so-called “pose of the pyramid”.

Since the Middle and New Kingdoms era, noble people were often depicted sitting on a chair. Several paired statues of the last kind have survived – the pharaohs and their wives, whose wooden statues “sat” on thrones in the tomb.

The tall sculptures have a calm, stable posture, giving which the sculptors tried to convey confidence and strength. This is especially well expressed in the wooden statues of black warriors guarding the entrance to the tomb of Tutankhamun (New Kingdom). The tall statues are also distinguished by exaggeratedly vividly conveyed physical strength and perfection, superbly worked out, albeit somewhat conditional muscles.

Finally, it remains to clarify the tradition of the left step given by the canon. In connection with the “left step”, the army command “with the left foot – march!” Comes to mind, the same – in sports. The coincidence itself does not clarify much but suggests the idea of a tradition preserved for centuries.

The opposition between the right and the left is known in folklore and ethnography: “to go to the left – you will not be alive”, it is an honor to sit “at the right hand”, a whole layer of expressions such as “just cause”, “left earnings”, “get up from the left foot” is heard. Here is the distinction between hands – “right hands” and “shuytsy”, erased from disuse but once obviously relevant. In the context of right and left – “rightness”, “truth”. In all cases, “right” is associated with positive values and “left” with negative values.