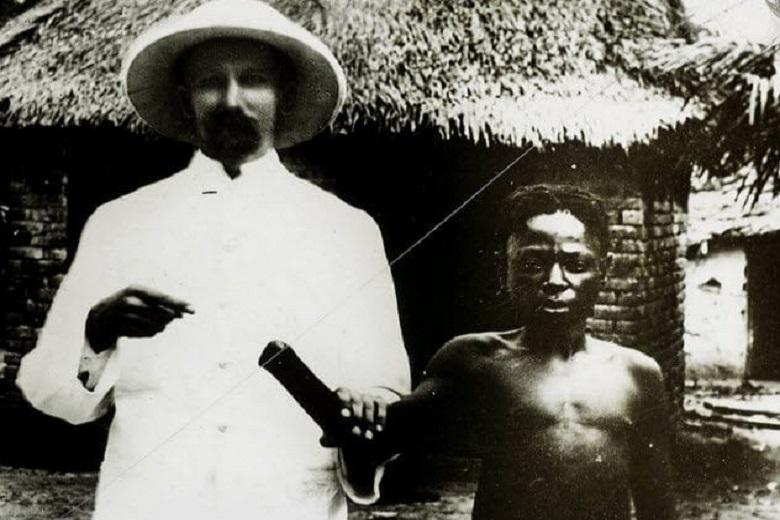 From 1885 to 1908, King Leopold II took over the Congo. He turned the nation into a money machine by growing ivory and rubber and making a fortune on the labor of the people who lived there.

Things quickly got out of hand. Leopold’s harsh policy of keeping people in work turned into a brutal government of mutilations and terror that led to the deaths of about 10 million people in a few short years.

Life of people in the Congo Free State was a nightmare the world had never seen.

1. Workers who failed to meet their quota were chopped to pieces and killed.

Rubber’s profits rose. In the 1890s, King Leopold sold more rubber than he could harvest. For the people of Congo, this meant that their quota went up, and compliance with the rubber tax became almost impossible. And that was a problem because if you don’t meet your quota, it can be punished with death.

African soldiers were recruited to enforce these rules, but that left a risk for the Belgians. These soldiers could save their victims or waste their ammunition on something else. So the Belgians drew up a law: every time a worker was killed, the African soldiers had to cut his hand off and submit.

Due to the fear of what would happen to them if they failed, the soldiers followed theirs. They had to fulfill their quota by filling baskets with hands, sometimes even collected from their own mothers.

An African soldier explained why he chops people’s hands after killing an old man in front of a missionary. “Don’t take this to heart,” the soldier said to the apostle. “They’ll kill us if we don’t take the rubber. The commissioner promised us that if we have enough hands, he will shorten our service. I’ve already brought enough people, and I expect my service will be over soon.”

When King Leopold got the right to take over the Congo, he started bleeding it dry for profit. Stanley had reported temples made of ivory, and people had found collections made of rubber there. Leopold wanted to make it profitable. He turned two-thirds of the country into his private land. The people there were forced and mandated to work for him.

At first, these people got a penny per pound of rubber, but Leopold soon gave them not a penny more. Instead, he called the harvesting of rubber a tax that everyone who lived on the land was obliged to pay. These people of Congo free state had no idea that their land had been sold, and now they were forced to work to live on it.

Their quotas were massive. The average person had to work twenty days a month to meet his rubber quota, and they weren’t paid for it. They would have to meet their quota first. When they had free time, they could work to feed their families.

Not every worker who missed his quota was killed instantly. Different commissioners dealt with this in different ways. Some inspectors were satisfied with removing the workers’ hands, but other commissioners maltreated the workers with savage blows.

The villagers were given number plates around their necks so that their overseers could keep track of their quota. If the workers were a little short, they would get 25 lashes with a whip. In harder cases, they might get 100. These blows were done with a strong whip made of hippopotamus skin that could break the skin quickly. Sometimes the victims died.

When other Europeans traveled to Congo and saw what happened, they were shocked. However, the people there were not impressed. A European officer reported that he had complained to Mr. Goffin, the secretary of the railway company in Congo, that he had seen men kicked, beaten, and chained to their necks.

For Mr. Goffin, this was just business as usual. “Mr Goffin shrugged his shoulders,” wrote the officer, “and said that was nothing.”

4. Villages were burned down

When a complete village failed to meet its quota or refused to pay the rubber tax, soldiers were sent down there. An army of men marched into town, slaughtered the people, and burned the entire village down. This happened a lot. A Swedish Missionary reported that 45 cities in his area alone had burned down since he arrived.

Some villages were devastated for almost no reason at all. One village was destroyed by the soldiers, with 50 dead and 28 captured. The women were chained neck to neck and dragged out of the village. Although they met their quota, their recorded offense was that “the rubber brought to the state by the villagers was not of the best quality”.

Another city was targeted because they had been unable to deliver their rubber. There was a war raging in a nearby town, and it was not safe for the villagers to make the journey. A missionary wrote to the commissioner on behalf of the villagers. But the commissioner sent his soldiers. While the preacher was begging for mercy, the soldiers set fire to the city.

5. Women and children Were  brutally tortured

The atrocities of the Congo Free State had a purpose; they were meant to scare people into working. The Belgians did not intend to slaughter Africans, but they wanted Africans to work without paying them. The Belgians used psychological terror to motivate the Congolese. In some places, this meant doing terrible things to the working families.

Women were often abducted from villages that did not provide enough rubber. They were held hostage until the chief was able to meet his quota. Even then, women often remained imprisoned. When the quota was met, the men of the village had to buy back their women by giving up some of their cattle.

There was no limit to how terrible this could get. After a man was sent to a town because he did not meet his quota, an African soldier reported that his European commander had ordered him to set an example to the town.

“He ordered us to chop off the men’s heads and hang them from the village palisades, including their sexual members,” said the soldier, “and hang the women and children from the palisade in the shape of a cross”.