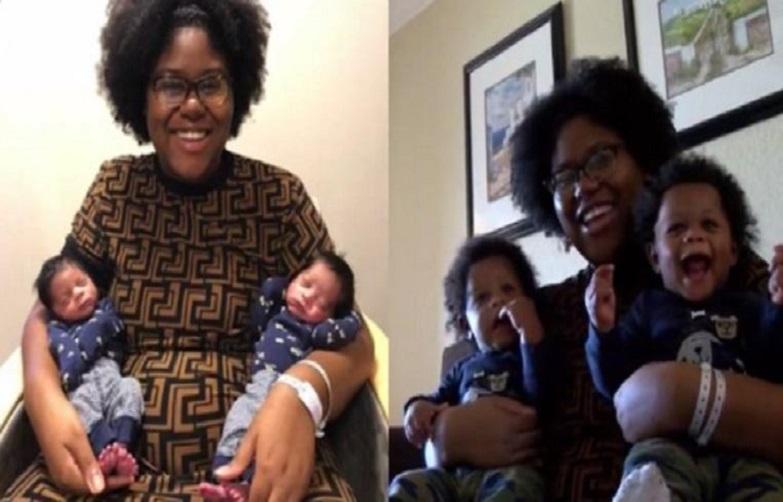 The Wolliston family from West Palm Beach is having a double party this year. Mother Alexzandria had twins in 2019, one in March and one in December. Her gynecologist was stunned. “You’re more likely to win the lottery than to have twins twice.”

In March of this year, Wolliston gave birth to her first two sons: Mark and Malakhi. The two healthy boys asked enough attention, so there was no reason for father and mother to go for another child. Yet it happened. In December, two more boys were born: Kaylen and Kaleb. All four babies are doing well.

Wolliston did not know that having twins – which is often hereditary – was in her family. But after the birth of her first two sons, she learned through her parents that both her grandmothers had a twin boy, all four of whom died prematurely.

She tells the regional news channel WPTV: ‘These babies are a gift from heaven. I feel that my grandmothers have given me their children from heaven. They both lost two boy twins and I get two boy twins. It had to be that way. I feel very blessed.’

Of the thousand babies born in the US, 32.6 are twins. The doctors of Alexzandria were astonished that she had twins twice in one year. According to her gynecologist, she had a statistically better chance of winning the national lottery this year. Alexzandria indicates that she is happy with her jackpot by winning ‘the twin lottery’.

Besides her four boys, the family also has a three-year-old daughter. ‘Luckily, I’m used to it a bit,” Alexzandria says, laughing. “She demanded more attention than these four together.”

The daughter loves her brothers and tries to help her parents a lot. Alexzandria says that she does not intend to expand her unique family even further.

1 thought on “A mother gets twins twice in one year”