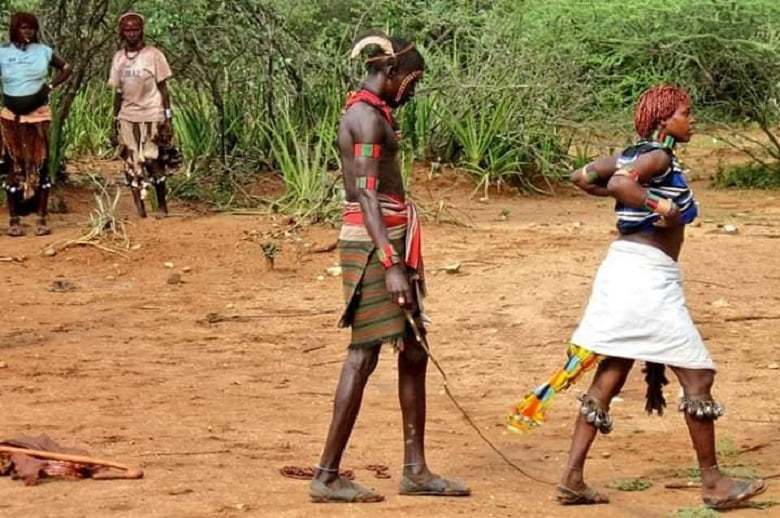 It is said that the Hamar tribe in Ethiopia are aware of everything that happens globally, but that has not prevented them from practicing a rather weird tradition of women who boldly accept whipping to show love and as part of an initiation ceremony for men.

The Hamar tribe is located between the hills on the east side of the Omo valley in southern Ethiopia. The Ethiopian tribe has remarkable traditions and practices, including a cattle-jumping ceremony where the women are whipped.

The ritual begins with all the women’s family members conducting a dance, during which they present themselves as subjects to be flogged by men who have recently been initiated.

The blows continue until their backs become bloody. During the whipping, females are not allowed to shout. They don’t escape from the ritual either but plead with the men to strike them more.

Women take these batterings to show their love and encouragement for the devotee, and their scars empower them to ask for his help in a time of difficulty.

The man must then jump over 15 cows to be allowed to marry. Once this has been achieved, a celebration is held to end the rite. But if the man could not succeed in jumping across the cows, it is a big humiliation and disgrace for him.

Whipping is not just a ritual

After the initiation ceremony, the Hamar’s women are subjected to flogging any time a man wishes, unless they have at least two children. The tribe rules also state that men do not need to explain why they beat women, as they can do so when and where they feel it is right.

This has created deep scars on the backs of women, which they boastfully display as beautiful. Despite this, the Hamar tribe women have to be as strong as the men and have to do all the household chores, take care of the children and sow crops, and keep livestock.

Hamar men may also marry several women, but women who are not first wives are treated more like slaves, as they do most of the work.