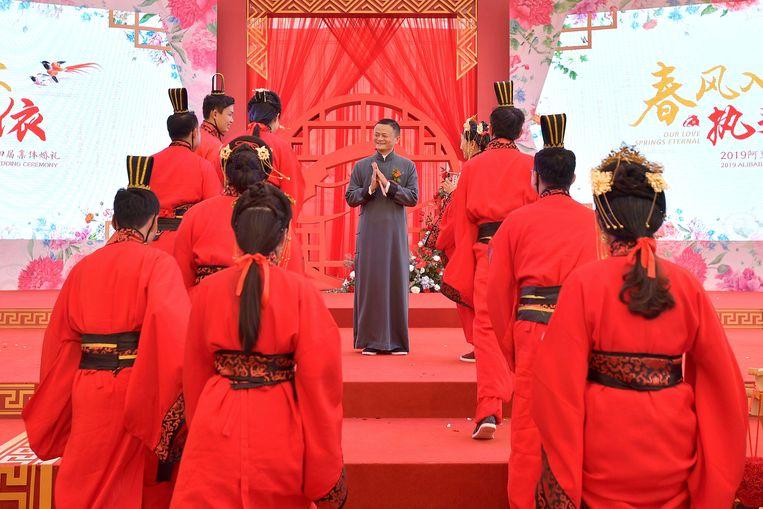 The founder of web giant Alibaba and billionaire Jack Ma called on his staff at a wedding ceremony to “have sezx marathons every day.” Or also: 996 at work, 669 at home. Excuse me?

What is 669? “Six days off six times, with longevity being the key,” Ma told the 102 couples who attended the ceremony in bridal attire. The word ‘nine’ or ‘jiu’ is a homophone (the name for a word with different meanings) that also means ‘long’. Ma also called on the couples to reproduce, because children are a better investment than property. “The first KPI (key performance indicator) of the marriage is to achieve results. Products must come and what is the product? Have children.”

China’s birth rate is falling, and the economy is stagnating. In 2018, the number of children born fell by 2 million to 15.23 million – the lowest birth rate since 1961, despite the one-child policy being discarded in 2016.

The statement was posted on Alibaba’s official website via Weibo (a kind of Twitter in China), with a winking emoji that led to much criticism. “Make an immoral joke to the public and promote it – is that justified to subordinates? Thumbs down this time,” was one of the online comments. “Is this funny? Not at all”, another writes. “Who on earth has the energy for 669 at home after 996 at work?” Wonders another.

Returning to the 996 work culture that he recommended last month, he called the long working days a “big blessing.” “Many companies and many people do not have the option to work 996. If you don’t work 996 when you’re young, when can you ever work 996? Let me ask you: if you do not spend more time and energy on your performance, how can you achieve the success that you want?”