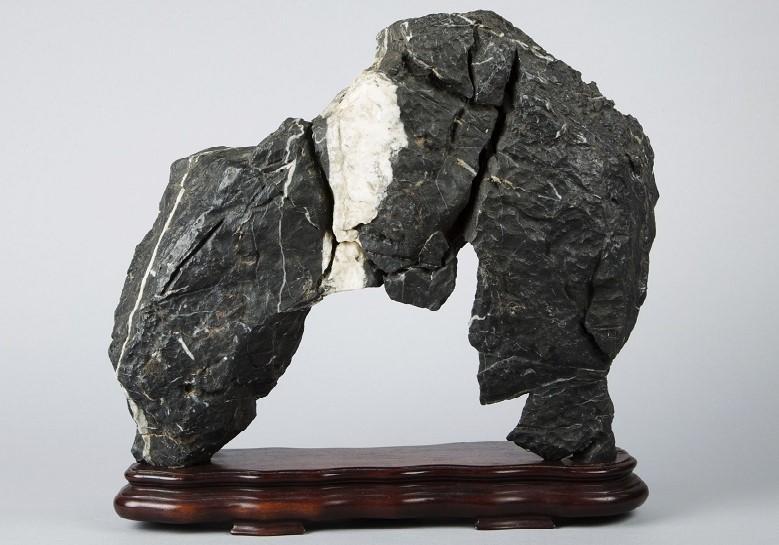 If for the Western mindset, this attraction to stones is more like a childish appeal and echo of childhood, for the Easterners, it is something completely natural, a custom that is not new but dates back to the remote past. The art of Suiseki dates back more than a thousand years, and its origins go back even further.

On vacation or during a trip to the countryside, one’s hands reach for a beautiful stone to take it with them, to have something real, appealing to the eye and, most importantly, reminding one of the good things in one’s house.

The Chinese have been looking for and preserving beautiful stones as early as the 3rd century BC for religious and aesthetic reasons. This is how the gardens were decorated with massive fragments of rocks. Thanks to their bizarre form, they promoted reflection, meditation. Stones resembling mountain peaks and ridges in shape were especially appreciated – this is how a kind of reduced variation of the vast world arose in the Chinese garden. These garden stones were called GongShi, where Gong meant spirit and Shi meant stone.

Over time, garden gongs moved inside the dwelling – for poets, writers, calligraphers, gazing at such stones has become a way to concentrate, tune in to thought. Gongshi were placed on the table behind which they worked or on a separate decorative table.

The main requirement for a “stone for contemplation” was its natural origin – nature was the only author here. Wind, water, rain and time – these are what became the creator of the correct GongShi, which contributed to the disclosure of the intellectual and creative energy of its owner.

Around the sixth century, the tradition of decorating a home with bizarre stones came from China to Japan. Initially, this custom existed only in the imperial family and among the aristocracy. With the development of the philosophy of Zen Buddhism – the philosophy of admiring nature, contemplation – stones began to decorate the homes of samurai. In Japan, they got the name “Suiseki”, from “Sui” – “water” and “seki” – “stone”. Like all the Chinese that came to the Land of the Rising Sun, the art of Suiseki acquired a special content and meaning.

Suiseki and his purpose

The GongShi stones were placed vertically – after all, they symbolized, first of all, mountain peaks. But Suiseki were installed horizontally, and the stone was placed with the most expressive side towards the viewer.

It is no coincidence that the name of the stone combines two elements – mobile and motionless. Thanks to water, which has been acting on solid rocks for hundreds and thousands of years, this bizarre relief appears these unique outlines that can be viewed endlessly. Each Suiseki stone is unique, both in itself and as a symbol of a part of the life path of its owner. The purpose of Suiseki is to evoke pleasant memories in the wearer.

But the main meaning of the appearance of such stones in the house of a Japanese is much deeper. Knowing yourself through contemplation of nature is the basis of Buddhist philosophy. Suiseki, “a landscape in stone”, opens the way to such contemplation. And it also symbolizes longevity, strength, constancy, calmness.

Not every interesting stone got the opportunity to get into the house of a Japanese with the status of Suiseki – the form, material, texture and signs, “seal” of antiquity were taken into account. Colour was also important – black and generally dark stones were most highly valued but white, a mourning colour for the Japanese was considered unsuitable for Suiseki. The best colour for Suiseki is black.

There are some rules that a Suiseki stone must comply

First of all, almost no human impact on it is allowed, so you can “destroy the soul” of the stone. There are exceptions – those cases when the base of the stone is made flat in order to place it on a stand, but this also reduces the value of Suiseki in the eyes of connoisseurs.

By the way, the rules for the GongShi are stricter in this respect – the stand has to be made specifically for the stone, and not vice versa; it is given the necessary shape and depth, sometimes it is filled with sand. In any case, the stones for contemplation are not glued, and the design of the “bed” turns out to be secondary to the stone itself.

Suiseki can be polished without disturbing the natural colour of the stone, patinated with special oils. Colour is very important – a stone is considered a real Suiseki if its shades are natural and soft, stones with spots and other patterns are especially appreciated.

The Japanese strive for certain surface quality. It is believed that a dry stone is a dead stone, and therefore Suiseki are looked after – watered with water. To obtain the desired external effect, this should be done over several years.

Suiseki in the eastern and western world

Of course, over a thousand years of Suiseki art, Japan has developed its own rather complex classification of different stones, which is not so easy for European, American or African to understand.

“Monseki” – this is the name of stones with an interesting pattern. “Sabaku-ishi” – those that were formed during splitting as a result of temperature changes (for example, in the desert). There are stones “biseki” – processed by man; they also provide inspiration for contemplation, even though they are no longer considered true Suiseki.

The most popular are still stones, similar in shape to mountains, rocks, islands. A separate category is made up of those that resemble the outlines of animals or even humans. Another type of Suiseki – those that look like different objects, such as a boat, a hut, stones with recesses where water is poured – is also valued – a tiny pond is obtained.

The most ancient and famous of the Suiseki stones are valued extremely high – the cost of one such stone is comparable to the price of a luxury house. Passion for the philosophy of stone penetrated from China and Korea – it is difficult to say exactly when this happened, but no later than a thousand years ago. Koreans call this art “Suseok”.

Another role of stone in Japan is the decoration of a rock garden, which helps to immerse oneself in the traditions of Zen Buddhism and find the path to enlightenment.