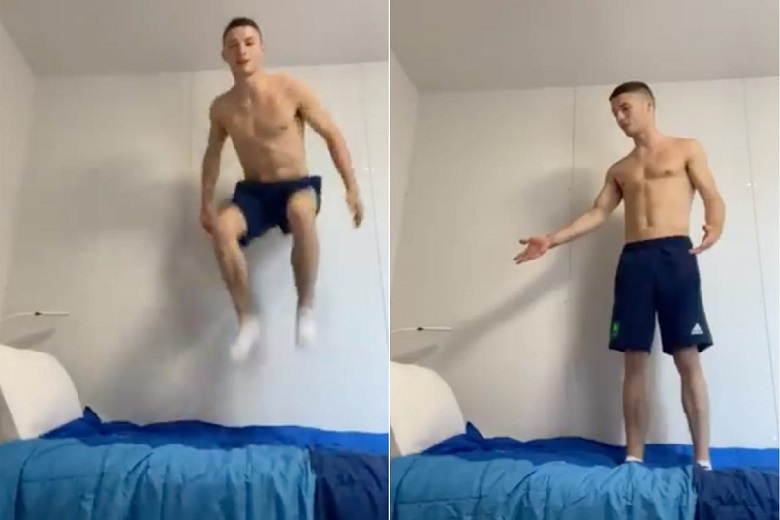 Books could be written about the goings-on in an Olympic village. Only this year, due to corona, will it be a little less intimate. Especially since the organization, or so it seemed, had opted for cardboard beds in the athletes’ rooms. “Anti-sex beds,” it quickly sounded. But the Irish gymnast Rhys McClenaghan now debunks that myth.

It was long-distance runner Paul Chelimo who fueled the anti-sex bed rumors. For example, the American, who took silver in the 5,000 meters at the Rio Games, tweeted the following last weekend: “Beds to be installed in Tokyo Olympic Village will be made of cardboard, this is aimed at avoiding intimacy among athletes. Beds will be able to withstand the weight of a single person to avoid situations beyond sports. I see no problem for distance runners, even 4 of us can do,” Chelimo joked.

However, the speculations about the firmness of the beds can now go in the trash, gymnast Rhys McClenaghan shows. He keeps a video blog during the games and refutes the stories about anti-sex beds. “Fake news”, he calls it, jumping onto the bed enthusiastically.

Meanwhile, the official Olympic Games Twitter account thanked Rhys for dispelling the myth. As you can see, “the sustainable cardboard beds are sturdy!” The organization plans to reuse the 18,000 beds at the Paralympic Games and recycle them afterward.

What Japan’s two capitals have in common: millennial Kyoto and modern Tokyo