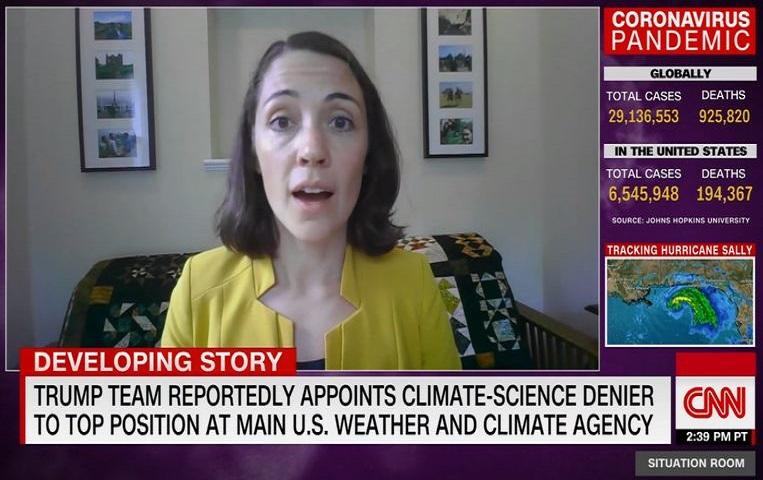 American scientist and environmental expert Gretchen Goldman have been inundated with likes on Twitter since she shared a deadly fair ‘backstage photo’ after a home video interview on CNN news channel this week. On TV, it looked like she was neatly dressed in a tidy room but off-screen, it was pretty messy, and she wasn’t even wearing pants.

“Just to be honest,” Goldman wrote her nearly 17,500 followers with a photo of herself taken during the interview on CNN. The scientist was a guest on the acua program, The Situation Room where she explained why she thinks it is a bad idea for a climate skeptic to rule the national weather institute.

On TV, it looked like Goldman was sitting comfortably in a tidy room, smartly dressed in a yellow jacket. The reality was completely different, as the snapshot proved that it has now collected almost 235,000 likes and was retweeted more than 22,000 times.

The climate expert turned out not to even wear pants under the jacket, and the room was messy with toys scattered on the floor. To get a better picture, Goldman had put her laptop on top of a chair and a table, and due to a bad connection, she was right next to her router.

The tweet received more than 2,000 responses, mainly from people who found the scene recognizable. Several twitterers showed their own creative solutions for video calls from home, with laptops on an ironing board or on a climbing tree for cats.

Because some people mistook Goldman’s shorts for underwear, she made sense this afternoon. “To be clear, I was wearing shorts.”

Goldman was more fortunate than American ABC reporter Will Reeve. He also did a video interview from home last April, for which he only wore shorts in addition to a shirt and jacket. His bare legs were clearly visible during Good Morning America. “I have arrived!” he tweeted about it himself. “In the most horrible yet hilarious way.”

By the way, working from home sometimes led to hilarious situations before the corona crisis. In 2017, Professor Robert Kelley went viral after an interview from his desk on the BBC, which was interrupted by his children walking in: