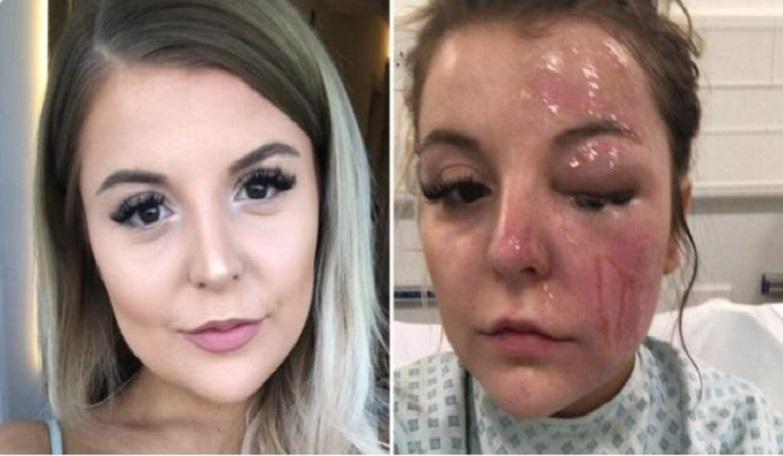 The eye of a British young lady was badly damaged after a stupid accident in the kitchen. Bethany Rosser wanted to cook two eggs in the microwave, but they exploded in her face. The insurance broker now wants to warn others, because she just followed instructions on the internet.

Rosser was home alone at the time. So there was no alternative but to call the emergency services. In the meantime, she poured cold water over her face.

The girl was rushed to the burn department of the Birmingham hospital. There, among other things, a wet dressing was placed over her face. She had to stay there for one night for observation.

In the meantime, she can open her eye again, but the vision remains very cloudy. It is not yet clear whether she will be left with permanent damage. Her skin will always be discolored for a long time.

“As I splashed myself with water, I could see my skin peeling off,” Rosser continues. “It felt horrible, I was in total agony. I could feel my skin burning for hours. I’ve never been so scared in my life – I was shaking and crying. The accident was, without doubt, the worst day of my life to date.”

A few people in her circle of friends appear to have committed the same mistake. That proves she is not a single case. The eggs of her cousin exploded while they were still in the microwave. “I have a cousin who did the same thing. Luckily for her, the explosion happened in the microwave, not in her face, she says. But “there’s also a family friend whose eggs burst as he got them out of the microwave – but again, luckily they didn’t go off in his face.”

Bethany Rosser insists “it’s very clearly dangerous as numerous people have had the same explosion happen from eggs in the microwave. I honestly wouldn’t risk it.”