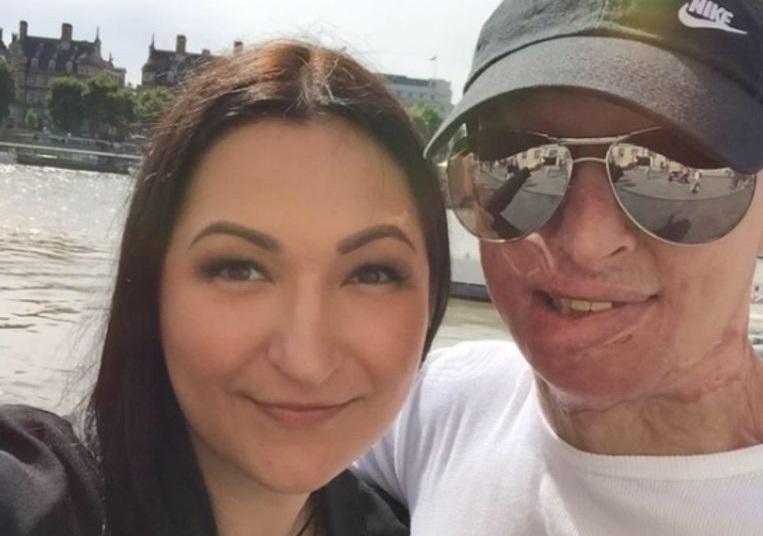 Fairy tales really do exist: Daniel Rotariu (33) was the victim of an acid attack almost three years ago, now he has married a woman who has cared for him all the time. “It was a beautiful day. I never dared to dream that I could experience something so beautiful,” he says.

July 27, 2016, was the day that the life of the man from Leicester changed forever. Daniel had gone to bed early after yet another quarrel with Katie Leong. He had forbidden her to lie next to him, a humiliation she couldn’t swallow. Out of revenge, the woman poured half a liter of sulfuric acid over his body.

“The photos speak for themselves”, the man testified. “I suffered severe burns and scars in my face, on my arms, my legs, and my torso. I also lost my sight. After the attack, I was held in an artificial coma for six weeks. It took me a total of six months to leave the hospital. Since then I have undergone countless complex operations.”

Rotariu was not only physically but also mentally severely damaged. “My injuries completely changed my life and I will never fully recover from it. But I am determined not to give up hope.”

Anna Catanga would grow to be a crucial factor in his difficult recovery. She was the one who lovingly received him in the rehabilitation center. “I enjoyed his flirtation. He was funny and smart, I enjoyed being in his company,” she says. The blind Rotariu had no idea what his saving angel looked like, but that was no obstacle to making the spark skip.

In the meantime, the couple has moved to Nottingham and they have a ten-month-old son together. Yesterday, the lovebirds put the crown on the work with a beautiful marriage in his Romanian hometown.

“There were many family members and friends who had not seen me since that attack. They are shocked, some have even started to cry,” said Rotariu.

“I found it very exciting to go to the altar,” added Anna. “My dress, haircut, and makeup looked fantastic. A real shame he couldn’t see that with his own eyes. Because of everything we experienced, that faithfulness was, of course, a very emotional moment.”

Rotariu had come to know his ruthless devil in 2015. They decided to share the costs for a house, but after a while feelings came into play. Katie was already over 50 years old at that time. And not 36, as she had told him.

Katie had been around for a long time planning to mutilate her partner. Five months before the facts, the police could even have seen her. Two concerned citizens were worried about the suspicious purchases her ex then made, but nothing was done with that call.

The woman also had the biography of Katie Piper on her bedside table. She had fallen victim to an acid attack in 2008, resulting in permanent blindness in one eye. And last but not least, Katie had already tried the stuff on minced pork, to be able to estimate the destructive effect.

“At first I thought she had boiled water tipping over me,” said Rotariu. “But suddenly my eyes let me down and I only saw a white glow, as if there was a thick fog hanging around me.”

Katie got a lifelong trial for the murder attempt. It will certainly take seventeen years before she has any chance of being released. “But despite all the misery, this story still has a ‘happy ending’ for me,” concludes Rotariu.