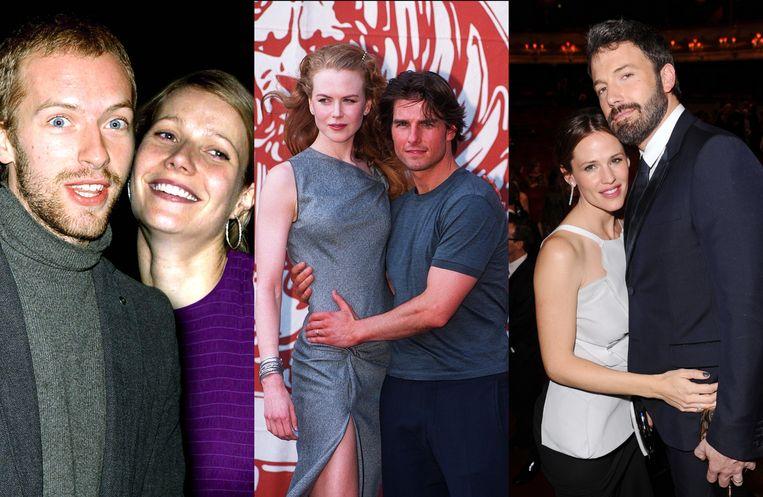 Love is beautiful, but unfortunately also often finite. Some couples seem to be destined to grow old together, but still, see their paths to divorce. Like Lady Gaga and Christian Carino, who broke their engagement a few days ago.

“It did not work, relationships sometimes fail. There is no long and dramatic story to pick up,” the two explained. And also these famous couples were frank about their break.

Gwyneth Paltrow and Coldplay singer Chris Martin divorced in 2014 after a ten-year marriage. In 2016, the chunks could no longer be glued and the couple opted for a divorce. Paltrow himself spoke of the term ‘deliberate decoupling’ because she finds the word divorce negative.

According to Gwyneth, that was a “terrible, painful and hard experience,” yet the two worked out their differences. “It’s easier to say that you never want to see each other again, but has that ever provided good? We both made mistakes. I have to admit that I am proud of the fact that we are here together and do not accuse or shame each other.”

In 1990 Kidman married Tom Cruise at the age of 23. “I fell in love with my ears,” said the actress. The two were happy, but through all media attention, they led an isolated life. “We were in a bubble, only we two existed. We became very dependent on each other.” In 2000 they celebrated their 10-year marriage with friends. “I thought our life together was perfect.”

But two months later, Tom packed his bags. Nicole was surprised by the fast separation. The media chased her for months. She felt as if she had lost her identity and no one wanted to talk to her now that Tom was gone. “It took me a lot of time to get over it,” she revealed. “It was a shock to me. But I was also impulsive and naive.”

For a long time, it seemed that Jennifer Lopez had finally found happiness in love. But after 7 years in 2011, the fairy tale between her and Marc Anthony came to an end. “We have decided to end our marriage. That was a very difficult decision.

We have come to the conclusion together and have entered into an agreement regarding all matters,” Lopez said. “I had already married twice and did not want this marriage to fail. But I lost myself because I was working so hard on it. I forgot who I was as an individual.”

Ben Affleck and Jennifer Garner split up in 2015. “After much thought, we made the difficult decision to separate,” the two said in a statement. “We go our own way as friends and with love for each other. We want to educate our children together and we ask for their privacy during this difficult time.” Ben and Jennifer gave each other the same word in 2005 after they met on the set of ‘Daredevil’.

The divorce papers stated that they both remain responsible for the upbringing and care of their three children: Violet, Seraphine, and Samuel. They also agreed to visit a parenting expert on a monthly basis. Ben and Jennifer also recorded in writing that they would never make abusive remarks about each other in the presence of the children. Quarreling, shouting or bad language at earshot of the children is also out of the question.

Reese Witherspoon may now happily be married to her manager Jim Toth, yet she was deeply unhappy after the break with her first husband Ryan Philippe. This marriage came to an end in 2006 after stories about wild parties, drugs and infidelity surfaced. The actress admitted that the divorce was “terrible.” “I wondered if I would ever feel better. I did not realize then that I was not really enjoying life.”

Witherspoon has also always stated that she does not believe in Hollywood wedding. “It is so superficial to claim that you have perfect children who never cry, that you never have problems and are always each other’s best friends. That is not true. We are ordinary people with ordinary problems.”

Drew Barrymore and Will Kopelman

Drew Barrymore opened a book about her divorce from Will Kopelman in 2017 during the talkshow of Ellen DeGeneres. “It was my worst nightmare,” she said. “I really wanted to educate children in a very traditional way and do it differently from my own upbringing.”

Kopelman and Barrymore married in 2012 but in July 2016 she applied for the divorce. Yet she never expected her to divorce Kopelman, with whom she has two daughters. “Sometimes you go away in a different direction than expected and then you have to figure it out with all your grace.”

Mary J. Blige has gone officially as a single again since last year. The divorce that the American singer had requested from her husband Martin Isaacs, after more than 14 years of marriage, finally came into effect after some tug-of-war about alimony. “The turning point came when I had to keep asking for respect. It all seemed in vain and I did not receive any respect. And if that is not there, then I must only continue and save myself.”

The divorce application of Scarlett Johansson came as a big shock to her husband Romain Dauriac, a French journalist. Meanwhile three years, the couple got together a daughter and married shortly after her birth. “We remain good friends and co-parents and will work together for a loving upbringing of our daughter,” Johansson said, who signed an agreement to take custody of their child together. “I only now know what I want and need in a relationship. And I have more tools to communicate. Not only with my partner but also with myself.”

After thirteen years, the marriage between Gwen Stefani and Gavin Rossdale came to an end. The singer is now with Blake Shelton, but she still mourned for her divorce. “I wish it did not happen, but at the same time I felt that it was part of my life,” Gwen said. However, she viewed it positively. “My heart has really broken twice, after that, I wrote great songs. I am so glad that I have been able to share those feelings. Good things always come from unpleasant situations.”

Hilary Duff filed the divorce papers in 2015. She and her husband Mike Comrie had been married since 2010 and had yet tried to save their marriage. “Mike and I were madly in love when we met. We both wanted to get married. I work from an early age, so that choice seemed like a good idea. But maybe that was not possible, although I was happy most of the time we spent together. Unfortunately, that was not enough to stay together. We both have to get used to the fact that we were not the match for each other that we used to think we were. We have decided to process this together.”

“I do not want to sound bitter, but I do not know if people are forever destined for each other,” Duff said. “Things happen when you’re in a long relationship and you can not always fight that. A marriage of twenty years, that must feel great. But there are also huge sacrifices.”