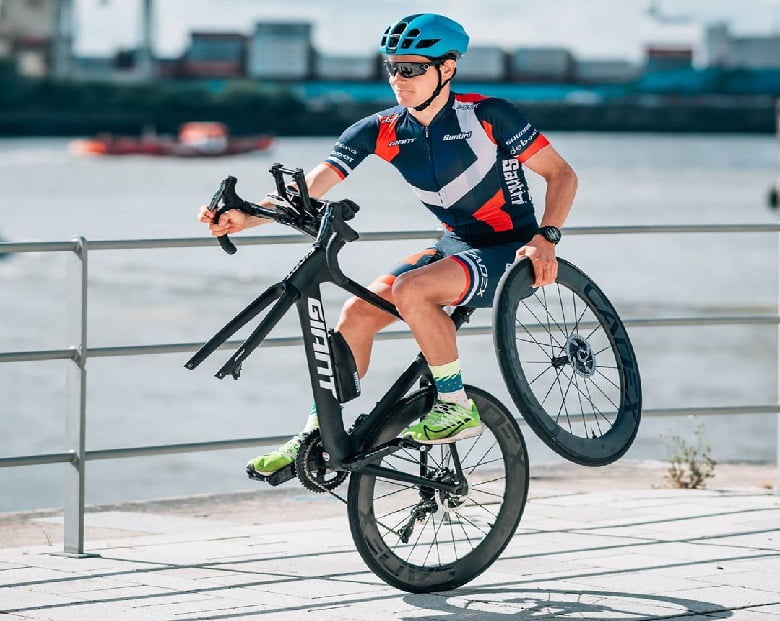 You have to be able to do something as Ironman world champion in the 70.3 distance. Gustav Iden (25) can not only swim 1.9 kilometers at lightning speed, cycle 90 kilometers, and run a half marathon. The Norwegian can even make Peter Sagan’s wheelies pale.

Crazy image from Hamburg a few weeks ago, there, triathlete Gustav Iden just pulled a wheelie with his front wheel in his left hand. How far the Norwegian drove and why he drew this striking stripe on his rear wheel is unknown. The fact is that it produced a great photo.

Iden is the world champion in the half Ironman. Last year he won in Nice at – by triathlon standards – a very young age against world toppers such as Alistair Brownlee, Sebastian Kienle, and Bart Aernouts. Last week he was the better of Pieter Heemeryck at a secret international triathlon in Ratingen.

By the way, there is a story attached to Iden’s world title. The Norwegian finished the game with a cap from Taiwan. Iden found the hat a few weeks before the Ironman 70.3 World Championship in Japan and then took it to Nice. When he became world champion, attention immediately fell on the cap (apparently promotional material for a temple in Taiwan). Iden himself has never been there, but the attention in Taiwan has been corresponding.

Since then, Iden has occasionally used the hat as a good luck charm. Physically, the Norwegian with the Taiwanese cap and the strange wheelies also dares to come out ‘crazy’.

At the beginning of this month, after a ‘failed’ World Cup at the Olympic distance (Iden came 11th), he flushed his disillusionment with a 16-kilometer swim in three days. Earlier, he also walked the Sierra Nevada with a colleague and fellow countryman, Kristian Blummenfelt.

In Tokyo, Iden will be one of the competitors next year for Marten Van Riel and Jelle Geens on the Olympic distance.