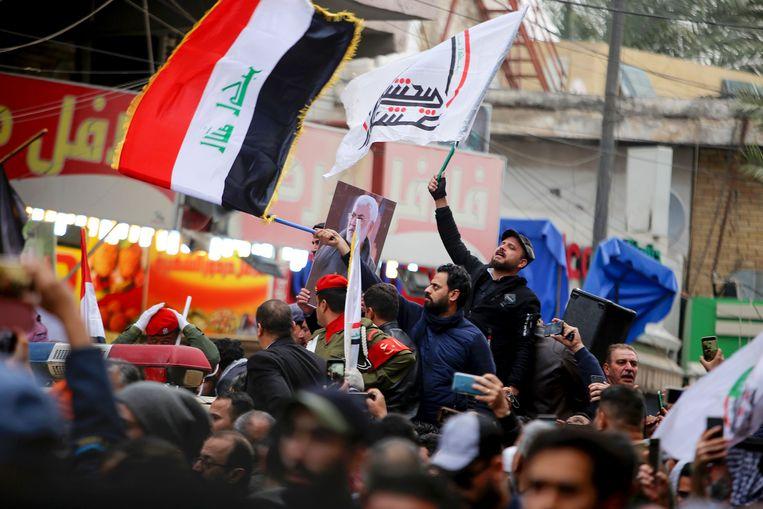 The funeral ceremony of the killed Iranian General Qassem Soleimani has started in Baghdad. Hundreds of thousands of mourners are expected throughout Iraq.

This morning, thousands of civilians have already taken to the streets of Baghdad for the commemoration of Soleimani and Iraqi militia leader Abu Mahdi al-Muhandis, which is taking place this morning. Many participants chant slogans such as “Death to America.”

Some people in the crowd hold up a portrait of Ayatollah Ali Khamenei, the Iranian supreme leader, or Hassan Nasrallah, the leader of the Lebanese Shiite Hizbollah movement. Nasrallah yesterday called for a “just punishment” for the “criminal killers” responsible for the death of Soleimani.

The funeral procession takes place in the Kazimiya district in Baghdad, where there is a Shiite shrine. An official national ceremony follows this in the Green Zone in Baghdad in the presence of many Iraqi leaders.

The American embassy is also located in the Green Zone. Among others, the resigning Iraqi Prime Minister, Adel Abdel Mahdi, attends the funeral. Also, former Prime Minister Noeri al-Maliki and Hadi al-Ameri, the leader of the Shiite groups in the Iraqi parliament, are present.

The bodies are then taken to the cities of Kerbala and Najaf, which are sacred to Shia. The body of Soleimani will be transferred to the Iranian capital Tehran on Monday for a ceremony, after which the major general will be buried in his hometown of Kermnan.