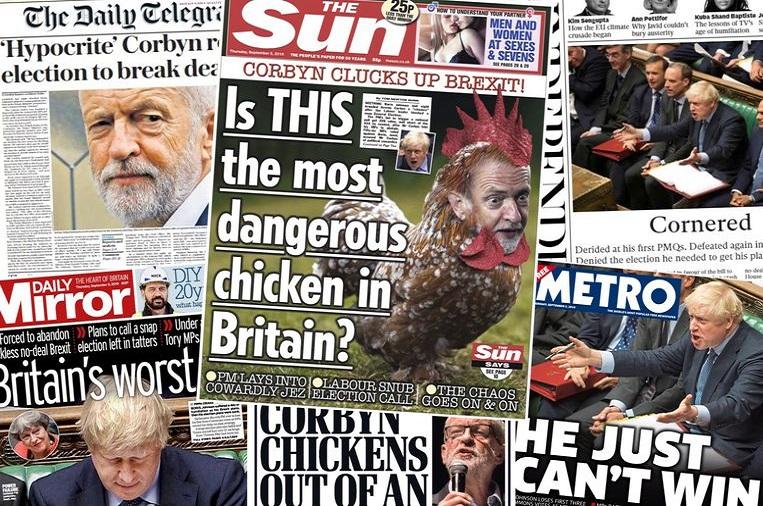 There is a hard blow this morning to opposition leader Jeremy Corbyn in the British newspapers. He refused to support British Prime Minister Boris Johnson’s proposal to hold early elections after the government was forced to request a new Brexit postponement. Johnson wants to avoid the latter at all costs.

For their swipe, the newspapers continue on the strange abusive words that Johnson used in parliament for Corbyn yesterday. He called the Labor leader, among other things, a “chlorinated chicken”.

“Corbyn chickens out of an election” (Corbyn backs out for elections) it sounds this morning in the tabloid Daily Mail. The newspaper also refers to the fact that Corbyn asked for elections several times. But polls suggest that Labor would not do well if they came and that would now make Corbyn reluctant.

The Sun even manufactures a Corbyn photo collage as a chicken at the headline “Is this the most dangerous chicken in Britain?” The tabloid writes.

The Telegraph is also on that track: “‘Hypocritical’ Corbyn rejects elections to break deadlock.” Just like The Express, which describes the refusal as “extraordinary cowardice”.

The Mirror – not precisely a Johnson fan – retakes the prime minister and calls him the worst prime minister in the UK (since the last one) “Britain’s worst PM”. According to the newspaper, Johnson is the only prime minister ever to lose his first three votes in parliament.

Other British newspapers also focus on Johnson’s humiliation. “He just can’t win,” it sounds in Metro and “cornered” in The Independent.

In The Guardian that is also the tenor: “Cornered Johnson suffers triple common defeats” in parliament writes the quality newspaper. Just like the Financial Times: “Johnson cornered after parliament gives him double defeat”.

In The Times, that sounds: “Johnson is stuck after MPs reject early elections.”