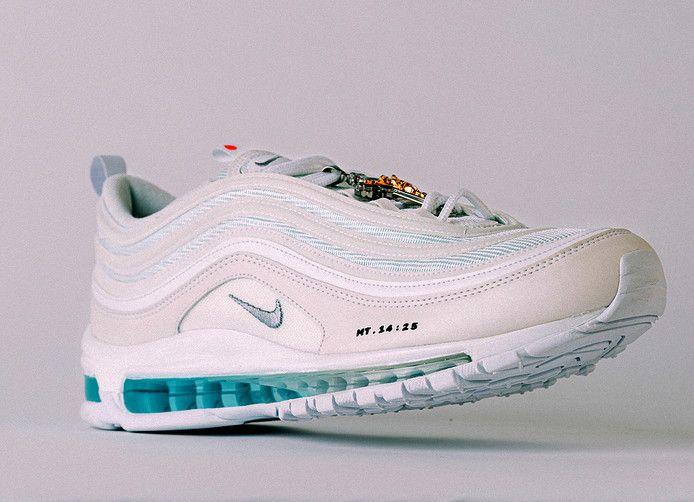 The New York-based fashion company MSCHF has made twenty pairs of Nike sneakers with 60 milliliters of water blessed by a priest in the translucent sole from the holy Jordan River that flows through Israel, Jordan, and Palestine. According to the makers, the wearer can ‘literally’ walk on water with Jesus’ sneakers.

The modified Nike Air Max 97 sneakers are made outside of the Nike company. The smooth walkers, who sold for around 3000 dollars and were sold out in no time, have not only a sloshing sole but also other references to Christianity. For example, the laces are threaded through a golden crucifix, and one of the heels is INRI. These are the first letters of the Latin inscription on the cross of Jesus: Iesus Nazarenus, Rex Iudaeorum (Jesus of Nazareth, king of the Jews). The inside is red: the papal color.

The makers have proudly made ‘divine shoes’ that are also packaged in a ‘beautiful holy box’. It is closed with a wax seal from the Vatican and decorated with the image of an angel. Although sneaker giant Nike has not yet responded to the unofficial sneakers, MSCHF (mischief, or vice) has already announced that it will probably make even more. When and where they will come on the market has not yet been determined.

The company says the Jesus sneakers are ‘a wink’ and ‘a statement’. According to spokesman Daniel Greenberg, he told the New York Post, the Jesus sneakers are a playful answer to what he thought was an absurd collaboration that Adidas once had with an ice-cream brand. “We wanted to show how crazy deals can be between certain companies. That is why we have linked Nike to Christ. And it turned out to work too because the shoes became a collector’s item and went away for a multiple of the price we had in mind.”