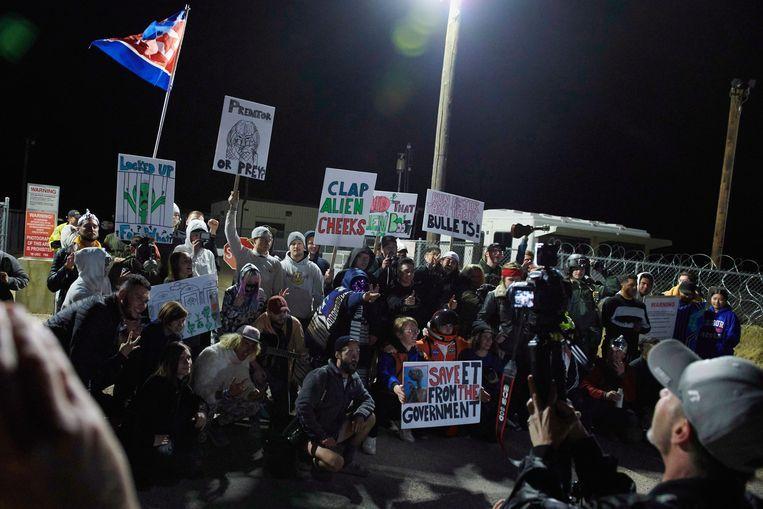 More than two thousand revelers gathered yesterday at Area 51, the mysterious test location of the secret US air force, in the state of Nevada. They met in response to the Facebook initiative “Storm Area 51”. It did not come to a storm, but three people arrested.

Allegedly alien space ships and their crew are supposedly hidden on the heavily guarded terrain. The initiator of the event had called on people to storm the complex yesterday. In total, more than 2 million people pledged online, but in reality, around 2,300 people showed up, according to local media. There was no storming.

“People wore crazy costumes at the entrance to the base,” said one visitor. “Why would you want to miss that? It is an experience that you will only experience once in your life.” Some partygoers wore space suits and masks of aliens. Some also had banners with them.

The festivities did not end in chaos, something that the American authorities feared beforehand. They warned people not to come to Area 51. One woman managed to pass through the highly secured entrance gate and was temporarily detained, but she has since been released. Two visitors were arrested for offensive behavior and alcohol abuse. “People are mainly here to see what’s going on,” said a security officer. “They are coming to have fun.”

According to the US Army, the mysterious basis is used to develop secret military projects. But for decades theories have been circulating that the US is hiding the remains of a UFO (and its crew) on the base, and also maintaining contact with extraterrestrial life in another way.

In 1947 a flying saucer was said to have crashed at the base. The area has, therefore, become a place of pilgrimage for people who believe in UFOs and aliens. The road that leads to the area, Highway 375, has been renamed the Extraterrestrial (extraterrestrial) Highway.

Because of a joke that got out of hand, more than 2,000 people eventually gather in the Nevada desert, near Las Vegas. In July, an American created the ‘Storm Area 51’ event on Facebook to ‘see the aliens’. The motto was ‘They Can’t Stop All of Us’. In other words: if we storm the basics with as many people as possible, they cannot all stop us.

In no time, 2.1 million people from across the globe indicated they were arriving for the planned storm on September 20. What led the US military to state in an official statement “to dissuade everyone from entering the base”. “We are always ready to protect America’s property.”

“We prepare for the worst”

It did not stop the first Americans from reporting earlier this week. Reporters from the Las Vegas Revie Journal have already seen several ‘camps’ along highway 375 near the town of Rachel. Visitors put up their tents or campers, and fluttered flags with ‘alien themes’. Ken Faulhaver (64) said to the newspaper: “We are here for the spectacle. We buy some beer and some merchandise.” And: “I hope the aliens come to the party.” Residents of the villages in the area feared that a mass of people would turn up, they told various news agencies. “We are preparing for the worst,” said a resident.

This is partly because festival organizers and other commercial parties have taken the idea of the storm. These days there are (music) events at several places in the region under names such as Area 51 Base Camp and Alienstock. In addition to music, lectures (about aliens) and films (also about aliens) are planned.

Beer brand Budweiser sponsors one of the parties and sells ‘alien’ headwear. The brand also made a flag (for 75 dollars) that should attract the attention of UFOs and their crew. Fast food giant Arby’s sells “the best meat for extraterrestrial life” from a specially designed restaurant.

“This phenomenon is a perfect combination of our interest in aliens, extraterrestrial, government conspiracies, and the desire to know what we don’t know yet,” said sociologist Michael Ian Borer of the University of Nevada at AP news agency.