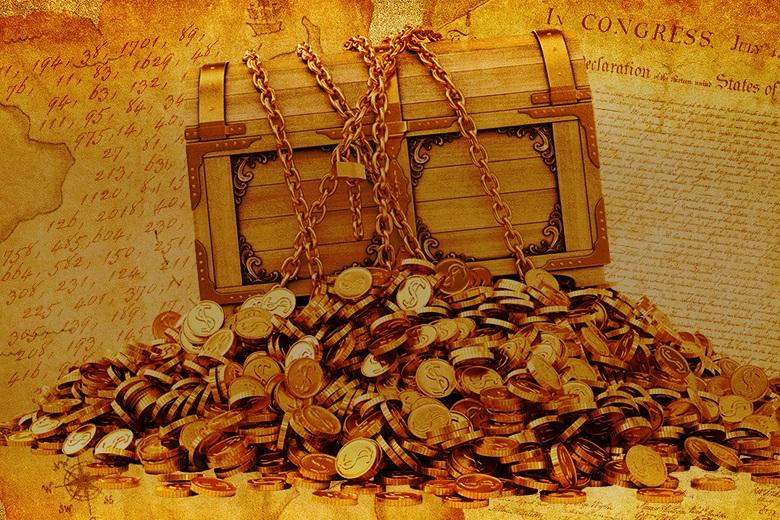 Reports about hidden and not found treasures, and even with an encrypted description of their location, excite the imagination of modern people. Therefore, it is not difficult to imagine how a brochure with such content, published amid the gold rush in the United States, was received.

This happened in 1865. The Virginian Book publishes a pamphlet with the long title, The Beale Papers, or True Fact Book Concerning a Treasure Buried in 1819 and 1821 near Buford, Bedford County, Virginia, and Still Not Found. The publication did not contain the author’s name, but it told its pages a fantastic story, even for the present time.

In 1817, a certain Thomas Jefferson Beale gathered a team and went hunting for bison in the Great Plains of North America. Sometime later, the group stumbled upon a rich gold mine about 250 to 300 miles from Santa Fe, then still owned by Mexico.

From that moment on, plans changed; instead of hunting, Beale began organizing gold and silver goods found nearby to the United States. In St. Louis, some of the metal was exchanged for precious stones – to make the treasure a little more compact – and all that was mined was hidden somewhere in an underground mine “not far from Buford.”

An unknown author reported that Thomas J. Beale turned up at a specific Morris’s hotel in Lynchburg, then left and returned in 1822, giving Morris a locked metal box for safekeeping, instructing him to open it if Beale did not show up within ten years. Bale himself searched for new adventures, ready to meet both Indians and wild animals – which, perhaps, was the reason for his disappearance in the end.

After it became clear that Beale would not return, Morris opened the box after waiting even more than ten years.

Inside he found several letters addressed to him and three sheets of paper with numbers. The notes explained what was encrypted on these sheets: on the first – the exact location of the treasure, on the second – information about its actual contents, on the third – a list of the names of relatives of the treasure hunters, who needed to give two-thirds of the treasures found, Morris was entitled to the rest.

The decryption of the cryptograms should have been done using a key that was kept by an unknown friend of Beale and was supposed to be in Morris, but the key was never delivered. So no matter how the keeper of the box with documents struggled over the code, it was not possible to unravel it.

In 1862, Morris gave the pages to one of his friends, the unknown author of the brochure, who told this story.

He, in turn, writes that attempts to unravel the cryptograms led him to the idea that Beale used the writing of characters from a particular book as a method of encryption, and to select such a “key”, he began to sort out all the editions that Bale could use at the beginning of the nineteenth century.

The second page was allegedly unraveled in this way; the US Declaration of Independence turned out to be the key book. Here’s the transcript:

In Bedford County, four miles from Buford, in some abandoned mine or cache six feet deep, I hid the following valuables, which belong exclusively to the people named on the document labeled 3. The original contribution was £ 1,014, and £ 3,812 silver was delivered there in November 1819. The second contribution, made in December 1821, consisted of 1907 pounds of gold and 1288 pounds of silver and precious stones obtained in St. Louis in exchange for silver to facilitate the delivery process, whose total value was $ 13,000.

All of the above is safely hidden in iron pots, closed with iron lids. The cache location is marked by several stones laid out around it; the vessels rest on a stone base and are also covered with stones from above. Paper number 1 describes the exact location of the cache so that you can find it without any effort.

The other two sheets did not succumb to this deciphering method, and their text has not yet been unravelled.

Whoever is hiding behind the personality of the author who wrote the pamphlet, in his speech one can feel an excellent taste and even a talent for artistic presentation; therefore, after the publication of this text, the question naturally arose: is not everything written fiction, the plot of an adventure story?

Various candidates were proposed for the role of the anonymous author, including the playwright John Sherman, who, incidentally, was the cousin of the publisher of the pamphlet and even the writer Edgar Allan Poe. Unfortunately, modern examination of the text did not give an unambiguous answer on this matter, just as there is no answer to whether Thomas Beale existed. Are the untold riches not an invention of jokers?

Be that as it may, sheets number one and number three have not yet been deciphered, even though at one time, the corresponding structures were called for decoding. True, according to one of the versions, these structures could have already discovered the treasures indicated in the sheets and secretly taken them out. On the contrary, however, information appears about finding an empty cache from time to time, which is taken as proof that Beale returned for the treasure himself.

The estimated value of the treasure, calculated from leaflet number two, is $ 43 million. Naturally, such a sum, in addition to the halo of mystery around the hidden treasure, attracts a wide variety of audiences – both amateur cryptologists and seekers of easy money, and adventurers, and simply those who like to puzzle over an unsolved riddle.

Some, desperate to figure out the cryptograms or maybe too lazy to do it, decide on a blind search. Beale’s letters to Morris suggest that gold, silver, and gems are four miles from Buford’s Tavern – enough to keep crowds of treasure hunters flooding in every summer in Pittsylvania County, Virginia. So they dig everywhere – under the roots of large trees and even in a cemetery, for which they receive penalties from law enforcement agencies.