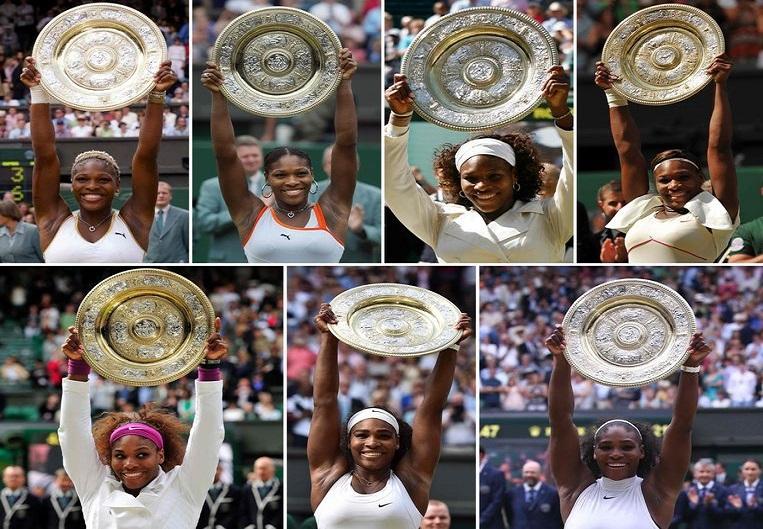 Serena Williams has again grabbed next to a 24th grand slam title. Again a missed opportunity for the 37-year-old American in her hunt for (the equalization of) the record of Margaret Court. An overview of Serena’s 23 grand slam titles and the times when it went wrong to level with Court.

3. Wimbledon 2002: Serena wins her third grand lamb a month later in Wimbledon. Again she beats her older sister. This time she wins 7-6 (7/4), 6-3. Serena is now also the new number one in the world.

5. Australian Open 2003: The Williams sisters face each other in four consecutive grand slam finals. Serena wins again and with her triumph in Australia, she has won all grand slams at least once. She scores 7-6 (7/4), 3-6, 6-4 from Venus.

8. Australian Open 2007: Exactly two years later, she won her eighth grand slam and third Australian Open by crushing Maria Sharapova in the final with 6-1, 6-2. Earlier, the Russian pulled the longest end in their previous confrontation in a grand slam final at Wimbledon in 2004.

11. Wimbledon 2009: For the third time she triumphs at the All England Club by beating Venus in the final with 7-6 (7/3), 6-2. All her titles at Wimbledon she used to take against her sister.

12. Australian Open 2010: Serena wins its fifth title Down Under by setting aside Justine Henin in three sets: 6-4, 3-6, 6-2. It will be the first and – for the time being – the last time that she meets a Belgian opponent in a grand slam finale.

13. Wimbledon 2010: For her fourth title at Wimbledon, she doesn’t have to pass her sister in the final for a change. Serena beats Russian Vera Zvonareva 6-3, 6-2.

14. Wimbledon 2012: The fifth title in London after two years without a grand slam. In the final, she is stronger than the Polish Agnieszka Radwanska. She wins in three sets with 6-1, 5-7, 6-2.

16. Roland Garros 2013: Her second title on Roland Garros follows eleven years after her first triumph on the Paris clay court. Serena beats Maria Sharapova in the final with 6-4, 6-4.

21. Wimbledon 2015: After three years she can celebrate a new title at Wimbledon, her sixth already. Serena beats the Spanish Garbine Muguruza with 6-4, 6-4. For the second time in her career, she wins the four grand slams in a row.

22. Wimbledon 2016: The seventh triumph in England and the 22nd total after a year without a grand slam. In the final, Serena beats the German Angelique Kerber with 7-5, 6-3.

These chances of equalizing the record were already missing:

Wimbledon 2018: Serena bites the German Angelique Kerber in the sand with 6-3, 6-3. Previously, Kerber beat her in the final of the Australian Open in 2016, when she grabbed her first grand slam.

US Open 2018: In a memorable final against Japanese Naomi Osaka, Serena loses her self-control. After fierce discussions with the umpire, she even gets a punishment where she has to hand in a game. Osaka’s first grand lamb – she wins 6-2, 6-4 – will be remembered for other reasons…

Wimbledon 2019: For the third time, Serena has the chance to match Margaret Court’s grand slam record. Once again it does not work: Romanian Simona Halep shows her supreme in the final at Wimbledon and wins with speaking 6-2, 6-2 figures.

Tennis boss lashes out at Serena again, to which her husband replies

Top Reddit resigns and wants black candidate to replace him

Oops! Did Serena Williams just give away the sex of Meghan’s baby?

Serena Williams reveals her physique after losing over 20 kilos

Not ‘Man’, but ‘Woman of the Year’: cover of GQ magazine with Serena Williams touches