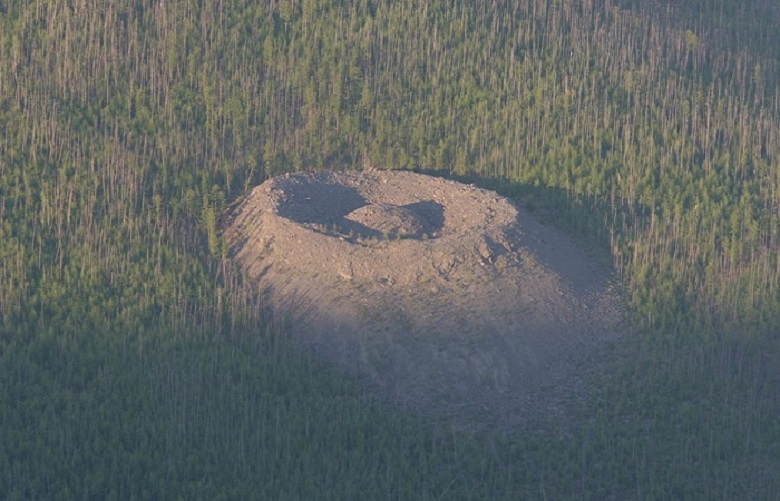 What’s this object, the mystery of Patomskiy crater, which origin has haunted Russians, researchers, and scientists for over 70 years.

Russia on its territory is simply replete with various unique places and natural wonders. Some of them are included in the list of the world’s most famous secret and unidentified mysteries. One of these mysteries is a unique geological formation in the form of a cone-shaped crater on the territory of the Irkutsk region, and the residents called it: “Nest of the fiery eagle”.

The development of the lands, which are now the eastern borders of the Irkutsk region, began by the Russians in the middle of the 19th century. In the documents of that time, it is noted that until 1847 the territory of the present Bodaibo region (this is where the mysterious object is located) was very poorly populated. And even then, to their advantage, local nomadic hunters came to these places seasonally.

Many objects on the first maps of this area were identified by their names translated from the Yakut language. Therefore, hardly any of the researchers of that time was surprised that one of the very full-flowing streams flowing in this area bore a name that in Yakut sounded like “Nest of a fiery eagle”. However, they took a completely new look at this name after a little over 100 years – after an expedition led by scientist Vadim Kolpakov, who explored the area in 1949.

How the mysterious cone-shaped crater was discovered

In the spring of 1949, the research group, led by V. Kolpakov, was engaged in quite its usual work – drawing up a geological map of the territory that now belongs to the lands of the Bodaibo district of the Irkutsk region. On the slope of one of the hills, scientists discovered a very amazing archaeological formation. It was a stone embankment in the shape of an ellipse. It was, as it were, elongated at a distance of 180 to 220 meters along the mountainside.

The height of the inner annular bulk embankment, the diameter of which was 76 meters, ranged from 4 to almost 40 meters. Inside this ring of crushed limestone, there is a 12-meter high stone slide made of the same material. According to the approximate calculations of scientists from subsequent expeditions, the total weight of the limestone rock that makes up the formation is about 1 million tons.

The expedition of Vadim Kolpakov, which was the first to discover and describe the amazing geological formation, gave it its name by the name of the Vitimo-Patom Upland. This is how the Patomsky crater appeared on the maps, which in scientific circles received another rather widespread name – “Kolpakov’s cone”.

Meteorite has nothing to do with it?

Despite its classification name – a crater, “Kolpakov’s cone” does not look like the usual traces of impacts of meteorites or asteroids that are found on all continents of the Earth. In its shape and structure, the Patomsky crater resembles some craters on the Moon and Mars.

However, their origin is a mystery to modern astronomers and geologists. The point is that during the “usual” fall of an asteroid or meteorite (if it did not explode above the surface but collided with it), a standard impact crater is obtained – a funnel of almost regular round or slightly elliptical shape.

Impact meteorite craters do not have any “internal elements”, such as ring rolls or hills in the center of the funnel. In addition to everything, researchers who have studied samples of crushed limestone stones that make up the “Kolpakov cone” note that there are no traces of rock melting on them under the influence of high temperatures. This is exactly what is observed in all impact craters on the planet. So Patomsky crater is not a crater at all? Then what kind of object is this: when, and most importantly, how did it appear in the Siberian taiga?

Theories of the origin of the “Kolpakov cone”

There are several theories of the appearance of the “Kolpakov cone” on the Vitimo-Patom Upland in the scientific world. Some researchers consider the Patomsky crater to be a man-made formation. In favor of their theory, they point to a certain similarity between it and the usual mine waste heaps – mountains of waste or associated rocks. However, where could almost a million tons of crushed limestone come from in the taiga if no workings were found nearby? Consequently, most scientists consider this theory to be completely untenable.

Since ancient times, the Yakut hunters have known this area under the name “The Nest of the Fiery Eagle”. From the histories, one can understand that a certain “fiery bird” flew to this place from heaven once upon a time, leaving such a mark after itself. Therefore, most scientists are inclined to the extraterrestrial origin of the “Kolpakov cone”. However, not all researchers agree that the Patomsky crater is a consequence of a meteorite or asteroid falling to the ground.

Supporters of the “meteorite theory” (by the way, Kolpakov himself was the first to put it forward) believe that such a crater could have formed after an underground explosion of a falling meteorite. That is, a celestial body at a relatively low speed (which was extinguished by the friction of a cosmic stone in the Earth’s atmosphere) crashed into the planet’s surface. The rather soft rock allowed the meteorite to enter it for several tens of meters easily.

After the incident, red-hot stone, having reached the underground reservoir with natural or shale gas (which, according to the theory supporters, was in this place), exploded. So this explosion became the culprit for forming an unusual cone inside the crater, throwing tons of deep rock onto the surface.

The adherents of this theory even point out that the Patomsky crater could have been left by a fragment of the world-famous Tunguska meteorite. After all, the cone was formed relatively recently – the Siberian taiga has not yet swallowed up its territory. However, some facts indicate that the culprit for forming the “Kolpakov cone” could be, though a cosmic, but far from the natural object.

One of the most unusual, and simultaneously explaining many details, is the crash theory at the Patomsky crater site of an alien spacecraft. You can, of course, be skeptical about such a judgment, but a few facts at least discard all other theories. And, as a maximum, they force, to some extent, to really begin to believe that the “Kolpakov cone” is nothing more than the place of a space catastrophe of an alien ship.

The supporters of this theory describe the tragedy of the alien ship itself in about the same way as the beginning of the “meteoric scenario”: the spaceship, crashing, at a speed of about 3m/s (with the braking motors turned on), crashed into the Earth. As a result of the impact, the “flying saucer” penetrated the depths of the hill for several tens of meters. It was covered with rock, although its thermonuclear engines continued to operate underground for several more years.

Then they exploded, provoking the ejection of limestone stones, forming a cone inside the crater, and irradiating the surrounding area with radiation. Proof of this is the research that showed a burst of radio emission in this area a little over 100 years ago. Traces of cesium and strontium isotopes were found in tree and soil samples.

The sudden death in 2005 of one of the researchers of this place, Evgeny Vorobyov, added even more mysticism to Kolpakov’s cone. The scientist was the head of the next expedition heading to the Patomsky crater. Not reaching the place of only 5 km, Vorobyov suddenly fell and died. A subsequent autopsy showed that the death of the scientist came from a sudden, causeless cardiac arrest.

Recent expeditions to the Patomsky crater failed to reveal the secret of its origin fully. But as a result of one of them, a new theory about the “Kolpakov cone” volcanic nature was born. According to scientists, the crater may be the result of geophysical processes in the depths of the Earth. Some experts believe that a full-fledged volcano may grow on the site of the Patomsky crater in a few decades.

There is also a hypothesis that the “Kolpakov cone” may be associated with the remains of the giant Siberian volcanic caldera, which in the Permian period caused the largest animal extinction in the history of the Earth.

One way or another, the secret of the Patomsky crater has not yet been revealed. And we can only guess what kind of “fiery eagle” this place is on the slope of a hill among the endless expanses of the ancient Siberian taiga.