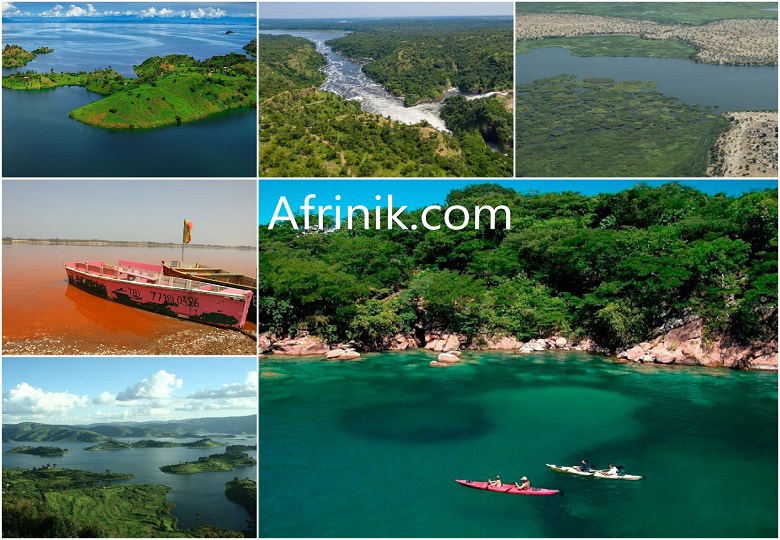 In Africa, lakes do not have a unique localization and are found throughout the continent. The only exception is the East African Rift Valley, where the African Great Lakes locates.

The arid climate does not prevent water bodies from being the focus of life. Although some of them are highly dependent on the rainy season, they can dry up almost entirely the rest of the time. The authorities of several countries took care of environmental protection and organized national parks and reserves near the most picturesque lakes.

The species diversity is also protected; thus, the population restores. There are lakes, both salty and fresh. In the first case, industrial salt production is not uncommon; in the second – water for agriculture. In terms of tourism, reservoirs are also attractive. There is no infrastructure and large hotels; travelers are lured on a safari or look at authentic Africa.

The most famous lakes in Africa

It is the biggest lake in Africa by area. Victoria lake Belongs to the territory of Uganda, Kenya, and Tanzania. The site is 69 thousand km²; the maximum depth is about 84 meters. Platinum was built in 1954, making Victoria a reservoir. The average annual air temperature in the district is above + 20 ° C, two rainy seasons per calendar year. Tours to the lake can order in any major city in the region. Even local fishers conduct excursions.

The deepest lake in Africa. Tanganyika belongs to 4 countries: Tanzania, DR Congo, Burundi, Zambia. The area is almost 33 thousand km²; the maximum depth is 1470 meters. Due to the hot climate and the drying up of the rivers flowing into Tanganyika, the sizes change throughout the year. Fishing is carried out almost throughout the territory. There are large port cities, and they are relying on poor tourists and exotic lovers.

Nyasa lake locates in Malawi, Mozambique, and Tanzania. The area is more than 29.5 thousand km²; the maximum depth is 706 meters. There are sandy beaches, diving, and spearfishing opportunities. The coastal zone is not very populated; the infrastructure is outdated in places or not developed. Fishing is not typical for all parts of the lake. Nyasa lake brings tourists attracted by the picturesque views, rare plants, and animals of the lake. The ecology is getting worse every year.

Rudolph Located in Kenya and Ethiopia. The area is 8.5 thousand km²; the maximum depth is 73 meters. It was Opened in 1888 and named after the Crown Prince of Austria. The local name Turkana was assigned to the lake already in the 70s of the last century. There are three islands of volcanic origin. There are plenty of crocodiles in the district, including abnormally large individuals. The area is also famous for archaeological finds from different periods.

DR Congo and Uganda share the lake. The area is over 2.3 thousand km²; the average depth is 17 meters. It was named after the British King Edward VII. It belongs to the system of the Great Lakes of Africa, and a canal links it to nearby Lake George. There are many national parks on the site whose activities are aimed at preserving elephants, chimpanzees, and other representatives of the fauna—included in the route of migratory birds.

It can found in northern Tanzania at the border with Kenya. The area is 1 thousand km²; the average depth is one and a half meters. The presence of salt and microorganisms triggers processes in the water, due to which the lake periodically turns pink. Hundreds of thousands of flamingos can found here at the same time. The Ramsar Convention protects the pool. This agreement allows the conservation of both wetlands and waterfowl.

Retba is located in Senegal near the Cap-Vert Peninsula. Area 3 km², maximum depth – 3 meters. Due to many halophilic archaea, the color of the water is pink or close to it. The salt content in the water is close to 40%. Continuous mining began in the 70s of the last century. Being in water without unique means for 10 minutes or more threatens to get burns.

Lake Chad belongs to Chad, Nigeria, Niger, and Cameroon. The name translates as “large expanse of water”. The area is more than 1.3 thousand km²; the average depth is one and a half meters. Sizes vary depending on the season. The lake has explored deposits of soda, which are actively extracted, and oil. Work is underway to prevent the drying out of the reservoir. It plans to build canals in the coming years and bring outflow from the Congo Basin to Chad.

Lake Albert is located on the border of DR Congo and Uganda. The area is 5.6 thousand km²; the average depth is 25 meters. It opened in 1864 and was named after Queen Victoria’s husband. The banks are steep for the most part. There are villages and ports, shipping between them is well developed. The area around is varied, with wetlands, mountains, beaches, and tall thickets. The fishery is on stream; there are more than 40 species of fish in the lake.

Lake Kivu is located in the border area of DR Congo and Rwanda. The site is 2.7 thousand km²; the maximum depth is 480 meters. The lake belongs to the system of the Great Lakes of Africa. The Ruzizi River connects it with Lake Tanganyika. There was a legend about the eruption of a nearby volcano when the water in Kivu boiled and the fish boiled. There are methane deposits at the bottom, which carry the threat of an explosion in an earthquake and other cataclysms.