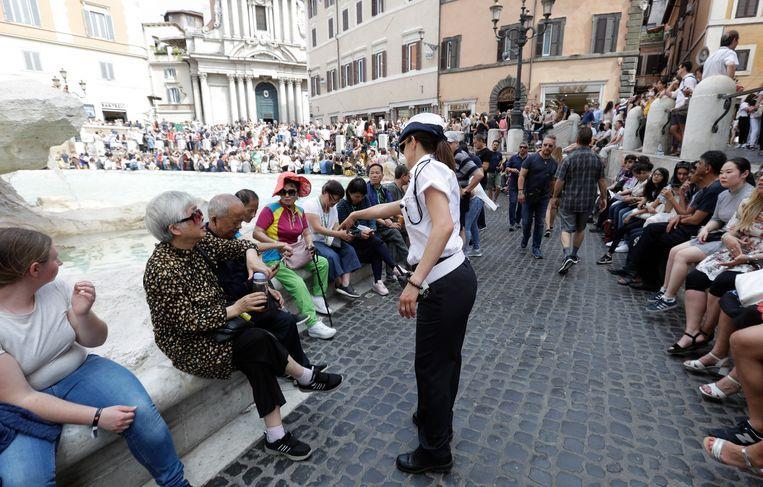 Rome is tired of the misbehavior of many tourists. With a lot of new rules, the city council hopes to finally limit this nuisance. And these measures go quite far.

Men who walk topless through the streets of Rome, hang a love lock on the bridges, eat ‘messy food’ around popular tourist attractions such as the Trevi Fountain, it’s all forbidden from now on. The spout of a public water fountain should not be touched with your lips and even ‘bouncing’ suitcases with wheels or strollers are forbidden on the Spanish Steps. The authorities of Rome are also threatening ‘heavy fines’ for those who bathe or swim in the fountains of the city.

The sale of the “skip the line” tickets to some of the major attractions of the Eternal City, the Vatican Museums and the Colosseum are no longer allowed. And the street artists who dress up as Roman centurions around tourist hotspots and ask for money for photos, can expect a fine from now on.

Virginia Raggi, the mayor of Rome, told The Telegraph: “Rome is and remains hospitable, but that doesn’t mean we have to tolerate bad behavior and damage to our city.” She said she would write to foreign embassies to ask them to make citizens aware of the new rules when visiting the city.

“The old rules have been updated to adapt them to the needs of modern society,” added Marco Cardilli, Deputy Chief of Staff and Security Delegation of the Council of Rome.

Following the example of Venice

The new rules of the city follow the Venice measures to tackle the overwhelming popularity of the city as a tourist destination.

The campaign, #EnjoyRespectVenezia, which started in the summer of 2017, writes that tourists are welcome there, but only if they follow the rules.

Visitors are encouraged not to swim in canals, to make picnic attacks in public places, to pause on bridges for too long, to drop litter, to stand or lie on benches, to place “love locks” on monuments and bridges, climb trees, buildings and monuments, feed birds, dress in public, or swim in swimwear. It is also forbidden to make too much noise at night or during the siesta (13-15 hours).

Violating the rules will cost you a hefty fine of up to €450.