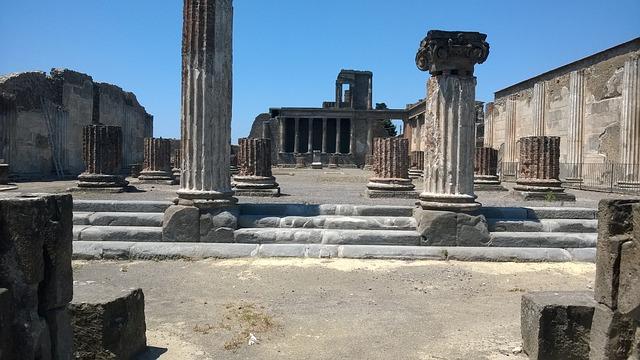 Herculaneum is one of three cities that fell victim to the eruption of Vesuvius in 79 AD. The brutality of nature, which destroyed the inhabitants and their homes, impresses everyone familiar with the history of these cities.

However, the irony of fate is that thanks to this monstrous cataclysm and the speed with which it hit Herculaneum, the world can look into this city after almost two thousand years as if it existed to this day.

Herculaneum was located on the shores of the Bay of Naples. The eruption changed the geography of these places, literally “moving” the sea away from the city. The number of local inhabitants at the time of the disaster numbered several thousand.

On the day the eruption began, August 24, 79, when Vesuvius sent the major blow to Pompeii and Stabiae – cities that were buried in a layer of volcanic ash in a matter of minutes, the inhabitants of Herculaneum, where the amount of ash that fell out was small, left their homes and went to the hangars near the sea, where they hoped to wait out the blow of the elements.

Perhaps the proximity of the water gave them a false sense of protection from the volcano – after all, ships and boats were moored near the coast, on which they could escape. But from the side of Vesuvius, a pyroclastic flow rushed to Herculaneum – a mixture with a temperature of about 400 degrees, consisting of stones, ash, and volcanic gases.

It was all over in a matter of minutes. The stream engulfed and covered the city, including the hangars, where people prepared for sleep and hoped to wait out the danger. Nineteen centuries later, hundreds of skeletons will be found here – and only a few in the city, including in the building that received the corresponding name from archaeologists – the House of the Skeleton.

The city is so well preserved that, when viewed from afar, only the absence of roofs makes it possible to determine where Herculaneum ends, and modern Ercolano begins. However, the roofs of some houses of the Roman city have survived – as well as individual shutters, stairs, and even frescoes, the stream from Vesuvius was so fast, instantly displacing oxygen from the premises.

Interestingly, before the major catastrophe in 79, Vesuvius held a “training” one – in 62, an earthquake had already damaged the city, destroying some buildings. Then some of the inhabitants heeded the warning and left the city, while the rest relied on the gods’ will. As a result, the lava layer over the city was up to ten meters, and over time a new village appeared on this place, and the memory of Herculaneum became a thing of the past.

Streets and buildings of Herculaneum

The streets of Herculaneum – Cardo (north to south) and Decumanus (east to west) – divide the city into rectangular blocks called insulas.

The main street – the Third Cardo – leads to the city center and makes a special impression, firstly, the quality of the paving, and secondly, the presence of the sidewalk.

At the corner of this street is the building where the curia was located – the city council is called the college of Augustus. It is a house with beautifully preserved frescoes, very reminiscent of Pompeii’s wall paintings.

In the small room of the gatekeeper, the remains were found, apparently, of the one who remained at his place of duty until the last minute.

The city has perfectly preserved interiors of buildings that were not used for housing – for example, a Thermopylae, an inn or tavern, a liquor store, or thermal baths. The latter is represented both by the central baths and country ones, which went straight to the coast, forever replaced by solidified volcanic rock walls. The main, central baths were divided into male and female parts; in the countryside, this was not provided for; men and women used baths at different times.

Against the background of frescoes and brightly painted interiors in the houses of Herculaneum, the one that does not follow the general tradition stands out especially – the large house of Telephus relief, where marble figures became the main decoration.

The house owes its name to the relief found in it, depicting Telephus, the son of Hercules. Interestingly, the views from the Telephus relief house were found in different frames of the Herculaneum – hence, this building was popular and was often visited by many townspeople.

Well preserved and very attractive, and now the house of Neptune and Amphitrite, richly painted with frescoes and decorated with mosaics and inlays. In this house, there was a separate room – the nymphs – the sanctuary of the nymphs.

In the bakery, millstones for grinding were found, and on the second floor, there were living rooms, apparently of the owners. There were many public catering establishments and public catering in the city in general; even a sign advertisement at the entrance to one of them has survived.

A hundred meters from the Herculaneum line is the Villa of the Papyri – famous for the fact that a little less than two thousand papyri survived the catastrophe, as well as more than sixty busts and statues of rulers, philosophers, and gods were found in it.

Herculaneum could also boast a theater that could simultaneously accommodate up to two and a half thousand spectators. But, unfortunately, it was impossible to free it from volcanic rock completely, and acquaintance with this structure, once famous for the richness of decoration and the number of beautifully executed bronze statues, can only be through the tunnels laid in the 18th century.

Past and present of Herculaneum

It is enough to fantasize a little, looking at the walls and interiors of the houses of Herculaneum. It is easy to imagine how they could look in their best times when they were filled with beautiful pieces of furniture, pillows, lamps, and curtains when there were delicious dishes on the tables and in glasses – local wines. It is this spirit of the late Roman Empire that this city buried under lava managed to preserve. True, access to Herculaneum and its further research is often limited due to the possible collapse and damage of the remains of buildings, and some of the houses are inaccessible to visitors.

The tragedy did not spare the city and its inhabitants but preserved priceless historical relics, monuments of the ancient past, works of art, and household items for history and descendants.