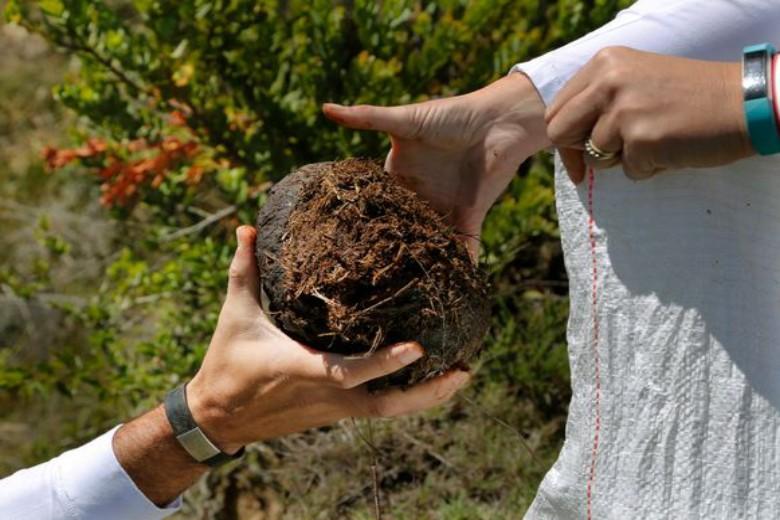 The producers swear it’s not a joke: South African gin makers have pulled their drink with feces from elephants. It is full of wonderful scents.

The makers of Indlovu Gin are Les and Paula Ansley, AP reports. They came up with a remarkable idea when they discovered a year ago that elephants eat all kinds of fruit and flowers. They only digest a third of them, the rest leaves the elephant naturally.

“That’s why you’ll find an incredible variety of plants in elephant feces,” says Les Ansley. “Why don’t we let the elephants do the job of collecting these beautiful plants and make them gin, my wife asked me.”

Her idea followed a safari where a ranger had described the digestive process of elephants. Weeks later his wife woke him up in the middle of the night when she got the inspiration. “Okay, I said sleepily. Let’s try it. Let’s see if it works.”

The first feces for the gin came by mail. The park where they had the idea, had sent the package. The couple, both scientists, started puzzling before they started making the gin.

Now they are collecting elephant pike themselves, with their bare hands. They describe the taste of the gin as “delicious, woody, earthy, almost spicy”. The taste changes slightly with the seasons and the location. The gin bottles show where the elephant droppings are collected. “So you can compare the different harvests with each other,” says Ansley.

Five bags of feces are enough for three to four thousand bottles of gin. For the process, the feces are dried and crumbled. Then the dirt and sand are washed out. The remains are fruit and pieces of flour, leaves, and bark that the elephants have eaten. For those who fear for their health: the plant remains are sterilized and dried. Then they end up in a kind of spice rack and then in the gin.

The couple had the gin tasted to friends without telling them anything about its origin. With a statement in advance, they get questioning glances. The first reaction of most people is: “What? No! But most people want to taste it,” says Ansley. When they hear how elephants digest their food, it is clear and they accept it, according to the gin maker.

The name of the gin is Indlovu, which means elephant in Zulu. The bottles cost 29 euros each, but the Ansleys don’t want to lose how many they have already sold. The drink is a hit with tourists who want to take home an original souvenir. One with a story. That’s why the gin is for sale at lodges that are rented out to visitors, duty-free shops and online.

Elsabe Hannekom, a customer who visited South Africa, reports that she even touched the elephant shit. She thinks it’s a good idea that she was allowed to take some of these majestic animals home with her. “The export of the African experience, so to speak.” After a sip Jade Badenhorst, another guest of the Ansleys, says: “Interesting. Very tasteful. Very tasty. I didn’t expect a gin to be so easy to drink.”