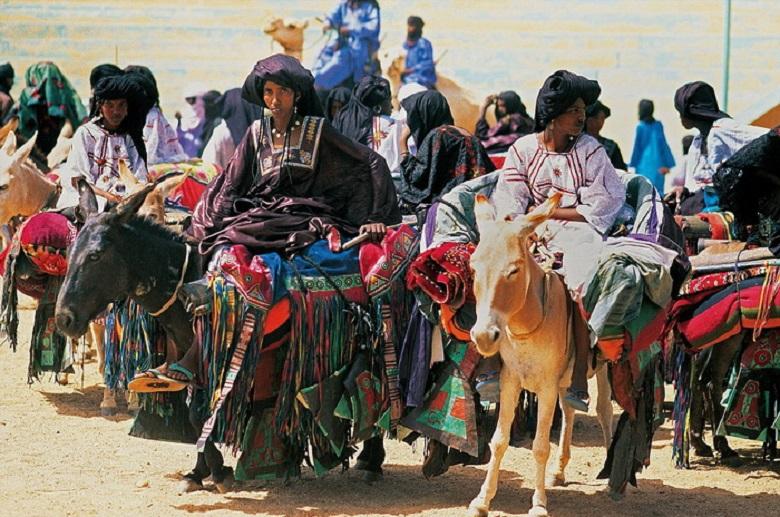 Tuaregs are one of the most mysterious peoples of Africa. Modern nomads have preserved an ancient culture, and much in their daily life seems surprising to us. In this African tribe, girls are allowed to have many lovers before finally make their choice. Men wear a face veil in adulthood. Tuareg tribe are nomads and often refer as blue people of the Sahara living under a matriarchy.

Perhaps their main difference from the rest of the world is the tradition of matriarchy. Only here are girls allowed to have several lovers before marriage, and men, after reaching adulthood, are required to wear a face veil.

Tuaregs are Muslim by religion, but their religious traditions are very original. It has long been established here that a man should not reveal his face. The young man receives two main gifts from his father on his birthday – a double-edged sword and a special face cloak. Without it, you cannot go out in public, but you need to wear it at home, covering your face even while eating and sleeping.

In addition, the Tuaregs wear unique indigo tunics, for which they have even nicknamed “the blue people of the Sahara”. According to one version, it is not known for certain what purposes the garment serves: it protects the Tuaregs from evil spirits. According to the other (more pragmatic), it protects from dust and sand.

Interestingly, the Tuaregs dye the fabric in a specific way: saving water. They do not soak it with paint but “hammer” it in with stones. Over time, the paint begins to crumble, and Tuareg’s skin is often blue, like real avatars.

The moral about the girlish way of life is quite democratic: girls are allowed to know several lovers before marriage. As a rule, a man can come to his beloved’s tent, spend the night with her, but this is by no means a guarantee that he will stay here the next evening.

As a rule, girls get married at the age of 20, applicants for a hand and heart must practice versification, sending poetic lines to the beauty. Girls have the right to answer them. However, they use their own unique alphabet, “Tifinagh”, learned from their mother (men in this tribe use the Latin or Arabic alphabet).

An amazing system has developed in the Tuareg society: men are excellent martial artists, they are fearless warriors and excellent merchants, women are custodians of cultural heritage, it is they who are trained to read and write, continue the folk tradition. In a word, the Tuareg ethnos is a vivid example of how equality between men and women is achievable in society. The main thing is to assign responsibilities correctly.

Not only in Africa, but it is also noteworthy that matriarchy is widespread in the Chinese Moso tribe. True, the young ladies there manage the house and solve social issues, are engaged in agriculture, hunting, cattle breeding, and the most daring master military affairs. But men often spend time playing

Chinese checkers and do not feel remorse about their idleness.