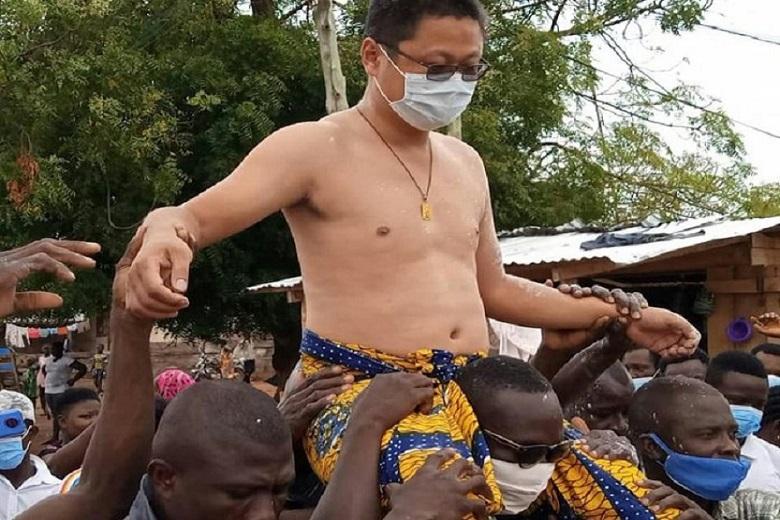 A Chinese man called Sun Qiang was drafted as a chief in Kwahu Abetifi, a town in the eastern region of Ghana. The new Chief Sun Qiang, by virtue of his enlistment, was given the Ghanaian name, Barima Kofi Ayeboafo, meaning “one who has done something to benefit others”. He was given the title “Nkosuohene”, which means the head of development.

The world is changing, a Chinese Chief in Africa is indeed first of its kind. A Chinese man called Sun Qiang has just been enlisted as a chief in Kwahu Abetifi, a town in the eastern region of Ghana. He was given the title “Nkosuohene”, which means the head of development.

The title of the Chief or head of development is an honorary title received by a person who deserves it. Therefore, the person is expected to bring about change in the region where they have been crowned.

The instruction ceremony took place this weekend. A large “durbar” was organized at Kwawu Abetify Palace to commemorate this special day.

Photos posted on social media show how Sun Qiang was lifted up and carried on the shoulder by young men and paraded through the city, as part of the rites of instruction.

This extraordinary event is not overlooked in the virtual world. Several Internet users have reacted to the enthronement of Sun Qiang. But, the majority of them did not hide their irritation against the Chief of Kwahu Abetifi. In contrast, others fail to understand why a Chinese would be appointed Chief in Ghana. Why?

“Because of Galamsey, the Chinese man is now Kontihene (Kontihene is a Ghanaian hiplife musician, e.d.)… Well, we are moving, ” said a ghanian social media user. “There is nothing wrong with it. In my hometown, our Chief created the same Chief in 2002, but a white man built an estate for us with his money and bought a house,” another user, Kofi Yeboah, replied.

“When are Ghanaians going to change their minds on this nonsense? Do black people have a leader in China?” Asked Eric Oppong. The case is still debated on the Web.

China calls itself a friend of Africa because it strategically offers a helping hand in the continent’s infrastructure development while positioning itself as a global superpower.

The Asian tiger has won the hearts of many African leaders and continental organizations with several charitable projects that have surprised the international community and cynics who claim that China’s interest in the continent is to overburden countries with debts to allow neo-colonization.

Among other things, China has built the African Union’s headquarters in Addis Ababa, Ethiopia, worth 200 million dollars in 2012 at no cost to the Continental Authority.

China recently offered Ethiopia $6 million for the launch of its first satellite into space in September 2019. It will also provide training before the launch of the satellite, which will come from China.

Senegal opened the world’s largest museum of black civilization on 6 December in the capital Dakar after 52 years of waiting due to a lack of funding. China has donated $34.6 million to make the dream of the country’s first president, Leopold Sedar Senghor, a reality.

In recent years, China has made considerable investments in Kenya, such as a new railway connecting the Kenyan capital, Nairobi, with the coast.