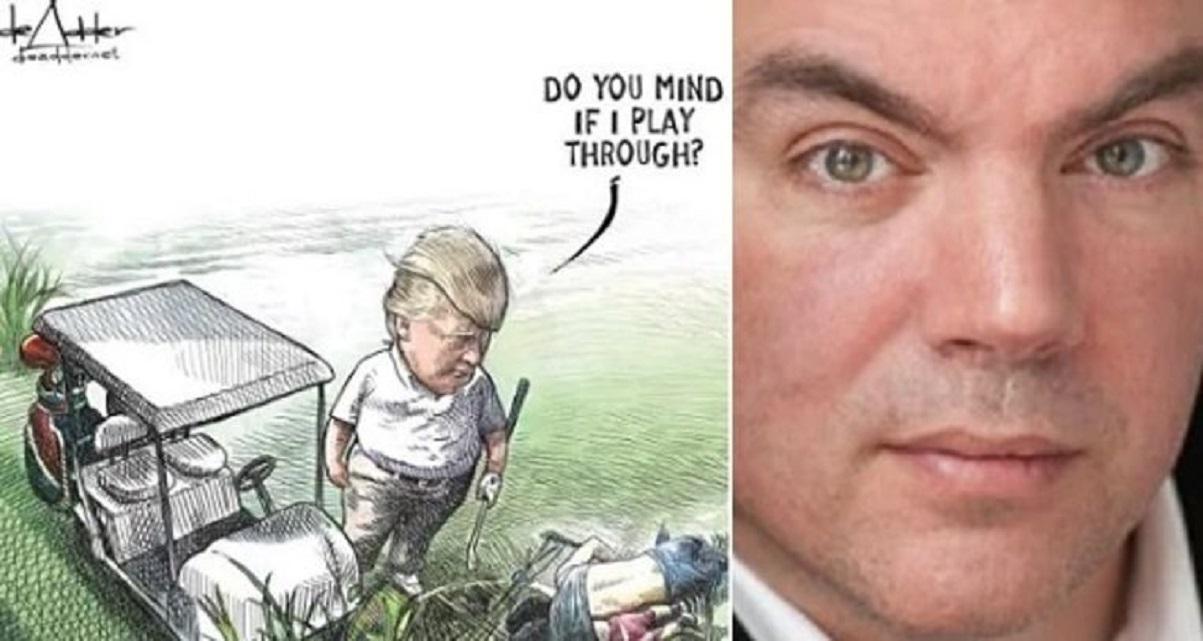 Barely 24 hours after this drawing about Donald Trump captured social media, the contract of the Canadian cartoonist Michael de Adder was canceled. But that is just a coincidence, the media company explains.

Michael de Adder has earned his living as a cartoonist for twenty years. On June 26, he shared a drawing on Twitter showing the American leader while playing golf and asking, “Do you mind if I play through?”

It’s a confrontational scene that refers to a drama with migrants from El Salvador: Oscar Martinez Ramirez and his daughter Valeria drowned last week when they wanted to cross the Rio Grande river to reach the US. A photo of the tragedy left no one untouched.

The image went viral in no time with loads of retweets, likes, and comments. But the drawing did not make the newspaper. Instead, the contract the cartoonist had with four Canadian newspapers – Moncton Times-Transcript, Fredericton Daily Gleaner, Telegraph-Journal and Telegraph Journal Saint John – was canceled.

All the four are owned by media group Brunswick News Inc – owned by businessman and billionaire James K Irving. In a press release, the company denied that Michael de Adder had been brought to the door because of the Trump cartoon.

“It is completely incorrect to suggest that Brunswick News Inc. has canceled the freelance contract with cartoonist Michael de Adder because of a cartoon about Donald Trump currently circulating on social media,” the statement said.

“This is a false story that has appeared carelessly and recklessly on social media. In fact, our media group was not even offered this cartoon by Mr. de Adder. The decision to offer our readers their favorite draftsman Greg Perry again was taken long before this cartoon came into existence and is the result of weeks of negotiations.”

The Adder confirmed the termination of his contract on June 29 in a series of tweets and revealed that it “really hurts”, but also that he is convinced that he will “survive” this setback. “I also work for other newspapers and a book will be published in September.” Nonetheless, he suggested how strange it is that someone is being put in the door for a cartoon that has not even appeared in the newspaper.

Some social media users find the unexpected termination of the contract strange. According to actor Mark Hamill (Star Wars), the drawing is even worth a Pulitzer. And George Takei (Star Wars) also describes the cartoon as “heartbreakingly accurate”.

Political cartoonist Wes Tyler stated on Facebook that the “firing” cannot be a coincidence because the billionaire family Irving has major interests in the US.