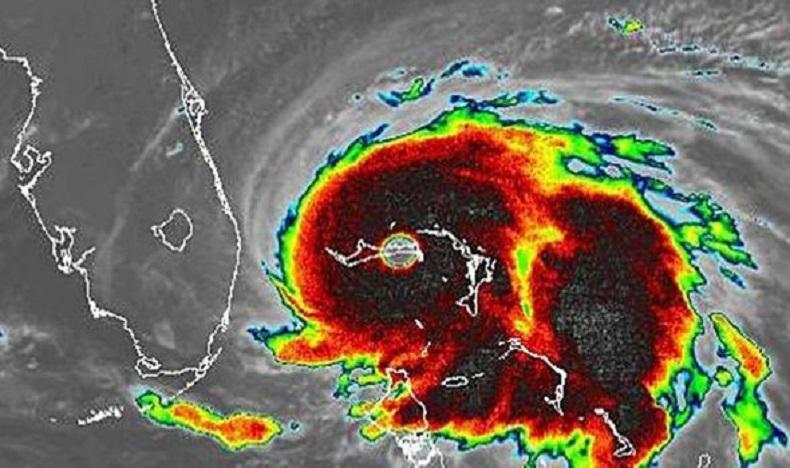 Hurricane Dorian went ashore full force yesterday on the Abaco Islands in the northern Bahamas and is currently racing across Grand Bahama Island. The arrival of the hurricane was accompanied by gusts of wind up to 350 kilometers per hour, meters high tidal waves and torrential rains. Roofs were blown from houses, cars were toppled, and high-voltage poles were pulled out of the ground. The American National Hurricane Center (NHC) speaks of a “catastrophic” hurricane that is slowly shifting west toward Florida.

“Pray for us, we are faced with a hurricane as we have never seen in the history of the Bahamas,” said Hubert Minnis, the prime minister of the archipelago consisting of some 700 islands between Florida, Cuba, and Haiti. The prime minister fears that many people have not followed his warning to leave. “This is probably the saddest day of my life.”

“It’s devastating,” says Joy Jibrilu, Director General of the Bahamas Ministry of Tourism and Aviation. “A great deal of damage has been done to property and infrastructure.”

In the meantime, there has been an official death. A seven-year-old boy was swept away by the water and drowned, reports Bahama Press. His sister is still missing. But there are also several reports of floating bodies and missing people from other areas in the Bahamas. The official death toll is therefore likely to rise.

In the hurricane itself, wind speeds are measured that go up to more than 295 kilometers per hour and gusts of wind above 354 kilometers per hour. The stormwater level is about five to seven meters higher than average and the NHC, therefore, warns of extremely high waves.

State of emergency declared in Florida

“As it looks now, the core of the extremely dangerous hurricane Dorian will continue to crash into Great Abaco and Grand Bahama today,” predicts the US National Hurricane Center. “The hurricane will be dangerously close to the east coast of Florida on Monday night.”

The state of emergency has been declared preventive in that state. This makes it possible, among other things, for the state of being able to call on federal emergency aid. The airports of Orlando and Fort Lauderdale will close from 12 noon, a total of 770 flights have been canceled across the country due to the approaching hurricane. Various schools also remain closed.

As a precaution, local authorities have issued mandatory evacuations for the approaching Hurricane Dorian for parts of Palm Beach and above Martin County and Brevard County. The evacuations apply to people in low-lying areas, residents of mobile homes, and residents of the peninsulas. It is unclear how many people are involved. Residents in other coastal municipalities are also advised to look for a safe place.

Evacuation order for coasts of South Carolina and Georgia

In South Carolina and Georgia, Governors Henry McMaster and Brian Kemp have ordered the evacuation of the coast. The removal of hundreds of thousands of people will start local time on Monday afternoon, and the hurricane is not expected in the states before Wednesday.

“This is a very heavy hurricane, with wind speeds of up to 185 miles per hour (almost 300 kilometers per hour) and even up to 220 miles per hour (more than 350 kilometers per hour). It is the toughest and largest in modern history and certainly the strongest that any of us has ever seen,” said McMaster at a press conference. “We know that not everyone will be happy with this statement, but we believe we can keep everyone alive.”

Meteorologists have difficulty predicting which path Dorian will follow. What is certain is that Dorian is a category 5 hurricane, the highest level a storm can reach. Only a small number of the Atlantic hurricanes have grown to that category. With a sustained wind force of 297 km/h and gusts of wind up to 354 km/h, Dorian equaled the record of the most powerful Atlantic hurricane ever to land on Labor Day in 1935. At the time, hurricanes were not given names.

US President Donald Trump called on his countrymen in the region to prepare for the storm and to take seriously the warnings and evacuation orders of the authorities. “It’s one of the largest we’ve ever seen,” said the president. “He will be felt hundreds of miles away from the eye of the storm or even more.”

Dorian has since become the second heaviest Atlantic hurricane ever recorded. Moving toward the US state of Florida, where more than a million people have been evacuated. The way it looks now, the storm would then head to North and South Carolina.

The Swiss bank and largest asset manager in the world has calculated UBS. The UBS analysts spoke earlier of an estimated cost of insurance of approximately 14.8 billion dollars but now adjusted that amount upwards.